Our Most Popular Posts of the Year

For Nebraska Game and Parks, 2017 was the year of the fish.

Ok, not really, but fish definitely played a strong role in our most popular Facebook posts of the year.

A blog by fisheries outreach manager Daryl Bauer about new state records was a big hit, as was a post about “alien fish.”

Recently caught in Nebraska, this species of fish doesn't even belong in North America. Can you guess what it is or how it got here? Read more to find out.

Posted by Nebraska Game and Parks Commission on Friday, September 15, 2017

The story of 14-year-old Jacob Cooper, who caught 10 muskies on the banks of Papio Creek in Omaha captured the interest of thousands of anglers in Omaha and elsewhere.

"10 Muskie total in the last five days of fishing, from 44 inches and 24 pounds, to 35 inches and 10 pounds." Learn more from WOWT 6 News about this 14-year-old's incredible catches.

Posted by Nebraska Game and Parks Commission on Saturday, March 25, 2017

A poll asking followers if they knew Nebraska’s state fish also got plenty of engagement (the correct answer is the catfish, if you were curious).

Do you know Nebraska’s state fish?

Posted by Nebraska Game and Parks Commission on Wednesday, September 13, 2017

A brief video of two deer with their antlers locked struggling in a creek bed north of Waverly got more than 600,000 views. Two conservation officers were the heroes of the story; they were able to rope the animals and free them.

Deputy Dennis Guthard took this video Sunday while working with the Nebraska Game and Parks Commission to free two deer head locked in a battle. See our other post for more details and photos.

Two other animal posts – one about an injured bald eagle and another about the, uh, unique way that turtles breath in frozen ponds – also cracked the top 10 posts of the year.

“It’s bizarre; we reached out to rehabilitation centers and vets all over the country, and nobody has seen anything like this”.

Posted by Nebraska Game and Parks Commission on Monday, July 3, 2017

Nebraska’s nine turtle species are a familiar scene during summer months. Where, though, do those turtles go when temperatures drop, or how do they handle cold conditions?

Posted by Nebraska Game and Parks Commission on Wednesday, December 13, 2017

Neither plant nor animal was the subject of a popular post from January. This post featured the cover of a 1962 issue of Outdoor Nebraska (a precursor of NEBRASKAland Magazine) featuring a very 60s illustration of the Walgren Lake Monster.

Did you know that Nebraska has a fascinating account of a Lochness-style lake monster on what is now Lake Walgren SRA?…

Posted by Nebraska Game and Parks Commission on Thursday, January 26, 2017

Wild edibles were another popular theme. A post about morel mushrooms – where and when to find them, and how to prepare them – also made the top 10 of 2017. A month later, foragers directed their attention toward a post about how to stalk (ha!) wild asparagus.

To hunt mushrooms in Nebraska is to hunt morels. The advance of spring weather, soil temperatures and moisture all prompt the emergence of morel mushrooms. Learn what you need to make the most of your hunt!

Posted by Nebraska Game and Parks Commission on Wednesday, March 8, 2017

Like morel mushrooms, wild asparagus is a natural food that should be sought in the springtime. #StalkingNEwildasparagus

Posted by Nebraska Game and Parks Commission on Thursday, April 20, 2017

This yellow sign is your ticket to hunting private land. Signs like this one denote land enrolled in the Open Fields and…

Posted by Nebraska Game and Parks Commission on Monday, October 23, 2017

One of the most popular posts of all featured a solitary photo of open grassland under a big, story sky, reminding us that Nebraska’s iconic Sandhills are breathtaking – and worthy of sharing with your Facebook friends.

Feelin’ lucky? The Sandhills are the largest grass-covered sand dunes in the Western Hemisphere. They cover about…

Posted by Nebraska Game and Parks Commission on Friday, March 17, 2017 Cara currently works at the Nebraska Game and Parks Commission and has written articles for NEBRASKAland Magazine, the Lincoln Journal Star among other publications.

The post Our Most Popular Posts of the Year appeared first on NEBRASKALand Magazine.

Citizen science workshop for educators is Feb. 20 in Columbus

LINCOLN, Neb. – Educators of younger students are invited to participate in a citizen science workshop Feb.... 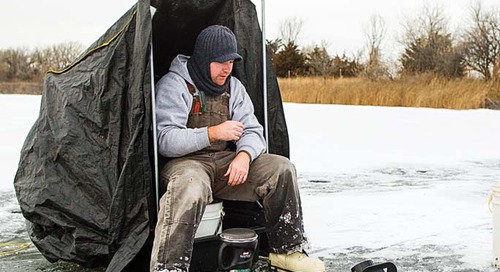 When heading out on frozen lakes or ponds to ice fish, you won’t want to leave home without these important...