Last winter I blogged about the world ice-fishing championship held in Europe, USA! USA! .  I am not going to tell you that I am completely familiar with international fishing competitions, but I know that at least some of them are quite different from what we have here in the United States. Some international fishing competitions, like the ice-fishing championship held last winter, are match-fishing competitions where teams compete, and anglers fish as teams.  In a match fishing format, anglers may be assigned or compete to fish certain areas, and then competitors try to catch every fish they can from their assigned water even if they are small fish, even minnows.  Tackle and techniques for those competitions are highly specialized.

You may lose interest when I say the target species in some international match-fishing competitions are small fish, and their format is different from what we think of as “fishing tournaments”.  However, fishing is fishing, regardless of the species, and the international competitions are also very interesting; there is a whole lot of strategy, thinking, and application of skills needed to be successful.  Like any fishing, there is something that can be learned from all of it.

This fall some headlines about international fishing competitions caught my eye.  This is one from The Angling Gazette in England:

There has long been an argument, usually from those who don’t fish, that angling or fishing, isn’t really a true sport.

In an attempt to finally receive full recognition the Confédération Internationale de la Peche Sportive (CIPS), also known as The International Sport Fishing Confederation have announced that they have approached the International Olympic Committee (I.O.C.) to get fishing recognised and an official “Olympic Sport”.

In a published statement CIPS write;

The CIPS has collected all required documents and answered all questions from the application questionnaire file of the International Olympic Committee, and has presented its application for the Olympic recognition.

“I would like to confirm we are convinced that obtaining this recognition, and becoming member of the Olympic family, would be very important for CIPS;

“Because besides giving a great additional contribution for promoting not only the sport of fishing universally, it would help enlarge the global development of the Olympic ideal all over the world” – said Mr. Ferenc Szalay,President of the CIPS.

The International Olympic Committee recognition would give also to all National Federations not recognized till now by their own National Olympic Committees the possibility to obtain this recognition and finally to acquire the dignity to be considered a sport with capital S, and a great possibility for our sport to be included
in a future Olympic Games.

CIPS was founded back in 1952, they currently represent 135 different national angling federations, spanning over 70 countries. In total, CIPS has over 50 million members. CIPS also represents all branches of angling including, coarse, fly, game & sea.

How about that?  Can you imagine fishing as an Olympic sport?  How cool would that be?

The International Sport Fishing Confederation is petitioning the international Olympic committee for inclusion in the Tokyo Olympics in 2016.

Here is another story in the BBC about it, Fishing Hoping to Land Olympic Status.

There is a quote in the BBC story that I found disturbing:  “But critics say fishing involves too much luck, is incomprehensible to outsiders and too boring to watch.”

You ever sat down and watched a soccer match?

Obviously, those “critics” do not know anything about fishing.  The more I fish, the more I am convinced that “luck” has nothing to do with it.  You make your own luck.  Someone said that “luck” is where preparation meets opportunity.  I agree!  That’s fishing!  Perhaps, if you know that “luck” has little to do with it, then maybe it would not be boring either?

The BBC story also noted that fishing was an unofficial sport in the Olympics one time before, back in Paris in 1900.  Unfortunately, someone lost track of the details of who won that competition and how many or how big of fish they caught.  Again, obviously a fisher-person was not involved in the record-keeping because I can guarantee that whoever took home the gold back in 1900 is still bragging about it, still showing the pictures to everyone they meet!

It is about time for a new gold medal winner! 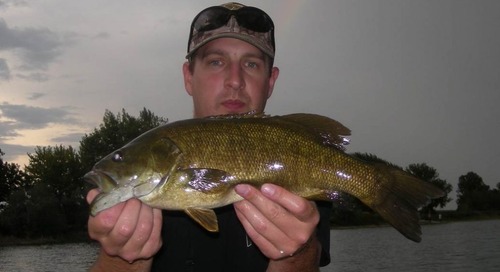 As I sit here “blogging”, I am pretty sure my open-water fishing for this season is done.  Sure you could s...

CHADRON — A reward is available for information leading to the conviction of the person or people responsib...