The Nebraska Upland Slam, a partnership between the Nebraska Game and Parks Commission and the Nebraska chapter of Pheasants Forever/Quail Forever, challenged hunters to harvest all four of Nebraska’s primary upland gamebird species, including ring-necked pheasants, sharp-tailed grouse, greater prairie-chickens and northern bobwhites.

In all, 140 hunters – ranging in age from 13 to 75 years – completed the Slam, including 121 from Nebraska. The remaining Slams were completed by hunters from nine states.

“Nebraska is truly the mixed-bag capital of the region, and the Upland Slam gives hunters another reason to experience the incredible upland bird opportunities that our state has to offer,” said Nebraska Game and Parks Director Jim Douglas.

The Slam helped families create hunting memories and solidified their hunting traditions. One family had three generations of hunters finish the Slam, and several parent-child combinations also succeeded in the challenge.

“These are great examples of a legacy of passion for upland bird hunting being passed down to multiple generations,” said John Laux, Game and Parks’ upland habitat and access program manager.

The challenge began Sept. 1 with the opener for sharp-tailed grouse and greater prairie-chicken. Pheasant and quail became available when their seasons opened Oct. 27. Seasons for all of the Slam species closed Jan. 31.

Upland hunters looking for a new challenge are urged to participate in the Nebraska Upland Slam, which continues when the 2019 seasons open this fall. 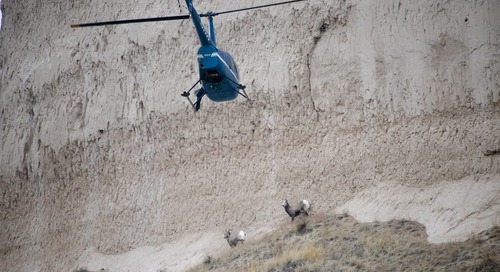 Bighorn sheep captured in the Panhandle

LINCOLN, Neb. – Prepare for the upcoming hunting season by attending one of the Nebraska Game and Parks Com...