LINCOLN – Warren Schwanebeck, a fish and wildlife biologist for the Nebraska Game and Parks Commission, has been named wetland manager of the year by Ducks Unlimited.

Schwanebeck was recognized for his work at Wilkinson Wildlife Management Area (WMA) in Platte County, where he oversaw a large wetland restoration project that was the result of a partnership with many different agencies. This spring, three endangered whooping cranes spent 12 days on those wetlands during a stopover on their spring migration.

“The fact that these critically endangered birds were able to use this habitat illustrates both the success of the project and Warren’s skill as a manager,” said Karie Decker, acting wildlife division administrator for the Nebraska Game and Parks Commission. “The entire agency is extremely proud of Warren and this honor he has received from Ducks Unlimited.”

The WMA’s comprehensive wetland management plan included creating dikes, installing new or improving irrigation wells for pumping, and installing water control structures for managing water levels. The wetland has become an attraction to many species of ducks, geese, migrating shorebirds, rare species such as least bittern, and threatened and endangered species like bald eagle, peregrine falcon and, most recently, the whooping cranes. Warren utilized an adaptive management approach on this wetland, relying on the expertise of the Commission’s wetland specialists, as well as a self-taught system of trial and error, resulting in a diverse and balanced wetland.

Schwanebeck has worked for the Nebraska Game and Parks Commission since 1969. He has managed the Wilkinson Wildlife Management Area since 1998. 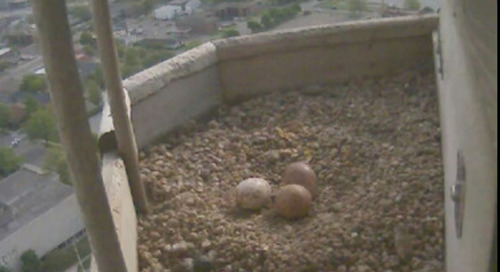 My calculations had 7-12 May as the time frame when the Capitol’s Peregrine Falcon’s eggs should be ready t...

LINCOLN – Portions of Dead Time State Recreation Area are closed because of high water.  The road beyond th...