My calculations had 7-12 May as the time frame when the Capitol’s Peregrine Falcon’s eggs should be ready to hatch.  Events started happening just a bit earlier than I expected, but in a disappointing way.  Late yesterday, only four eggs were observed rather than the five eggs which the birds have been incubating for about a month.  This morning, only three eggs were present. It is not entirely clear what happened and what went wrong.  However, it does not come as a total surprise.  As I explained in this recent article in the Lincoln Journal Star, this pair’s hatching success has not been great the last few years.  In 2014, the pair laid five eggs but only two hatched.   Last year, they laid four eggs but only one hatched.  Ally, the female, is fifteen years old and the male, 19/K, is a dozen years old.  As I have stated on previous blog posts, this is getting up there in age for these birds and this may be affecting their fertility.

There are three eggs left.  Keep your fingers crossed.  If you want to keep up with the latest Peregrine Falcon news, consider joining the Facebook community Peregrine Falcons Lincoln NE. 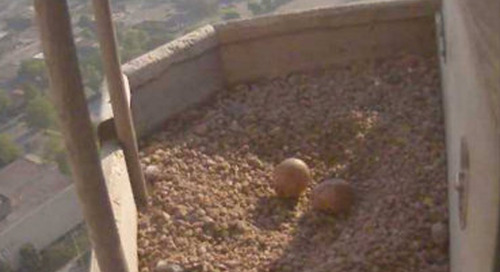 In a blog post yesterday, I reported that two of the original five eggs disappeared (removed and/or eaten b...

LINCOLN – Warren Schwanebeck, a fish and wildlife biologist for the Nebraska Game and Parks Commission, has...