On Friday, I got up early in the morning to follow up on a Whooping Crane report in Polk County.  On my way up there, I encountered two Peregrine Falcons close to North Lake Basin Wildlife Management Area near Utica.  One of the birds was on a dead American Coot on a county road and the other took off.  The bird on the kill on the road remained and I was able to capture a few photos. The time I had with the bird was brief and as it sat on the road my focus was on snapping pictures.  It wasn’t until I got home and looked at the photos that I noticed the bird was banded.   Photos of the bird in flight clearly show the bands. On the bird’s right leg was a standard silver USGS band and on its left leg was the auxiliary marker (color band).  The auxiliary marker was entirely red with white lettering.  This is a type of band we have not used in Nebraska during my tenure (which is twelve years).  Thus, the bird is not a local bird.  Unfortunately, I am unable to read the alphanumeric combination on any of the my photos, so the bird’s identity will remain unknown.

It was neat to see this bird and intriguing to ponder where it might have originated, but I’m bummed about falling short with the band read.  Such is life.

The post Near miss appeared first on NEBRASKALand Magazine.

Free Fishing and Park Entry Day is May 19

LINCOLN, Neb. – Free Fishing and Park Entry Day in Nebraska is May 19. Enjoy a Saturday of fishing or state... 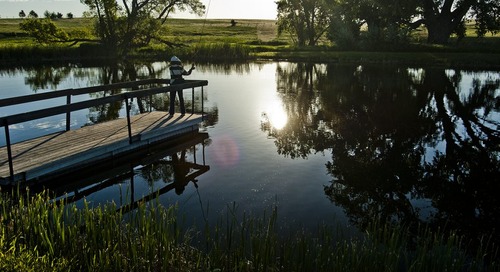 Among the Panhandle’s best fishing assets are the opportunities in and around Fort Robinson State Park near...