Among the Panhandle’s best fishing assets are the opportunities in and around Fort Robinson State Park near Crawford.

With the 22,000-acre park’s 11 fishponds and coldwater streams in and near there, anglers can seek everything from warm water species such as largemouth bass, catfish and crappie to all species of trout found in Nebraska. Furthermore, the buttes and pine-studded bluffs provide a beautiful scenic backdrop for photos of your catch.

As good as the fishing may be, it is sure to get better in coming years. That is because the Game and Parks Commission is kicking off a $2.8 million renovation project to improve the ponds in the park.

Joe Rydell is a fisheries biologist in the Commission’s northwest district and has been involved in the planning of the project. He said the ponds are due for some work, not only to make the fishing better but also to make them more family-friendly.

“Most of them on the Fort were built as hatchery ponds, or production ponds, for the old Crawford fish hatchery and they weren’t designed for a long-term fishery,” he said. “They were designed shallow and we need to deepen them out a little bit.”

Rydell said the project is being divided into two phases, with work on the Grabel Ponds, Cherry Creek Pond and its diversion reservoir, and the lower Ice House Pond coming first. He hopes to see the project begin this summer. The second phase will include work on Carter P. Johnson Lake and the Crazy Horse pond downstream from it. No completion date has been set, but he said anglers of all ages are sure to like what they see when the projects are finished.

The improvements will include include new fishing piers, access points, and kayak launches at several locations.

“We’re looking at not only improving the habitat of the ponds but we’re also going to improve access, while we’re doing it,” he said. “Angler access to a lot of these ponds will be one of the big differences that the public will see.”

Rydell said there are advantages to doing the project in stages.

“The ponds that get worked on will be out of commission. However, by staging it in two phases we’re going to have some pond fishing opportunities on the Fort throughout this project,” he said. “The ones that get done in phase one will be restocked with trout right away and will be up and going by the time we get into phase two.”

Most of the funding is being provided through the Aquatic Habitat Program, which works to improve conditions for aquatic life throughout the state. With Fort Robinson being one of the state’s biggest attractions, many people are sure to benefit from the improvements.

Projects such as these make me not mind spending a little money for a fishing license and an Aquatic Habitat Stamp each year. In many ways, the good times and memories that money produces make it a great investment. 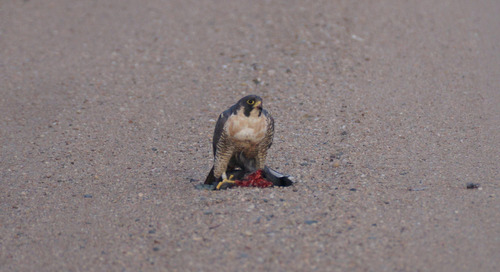 On Friday, I got up early in the morning to follow up on a Whooping Crane report in Polk County.  On my way... 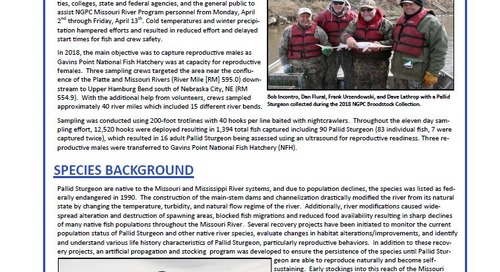 As I have said several times already this spring, it is a busy time for Nebraska fisheries workers.  From t...