Our communications staff recently produced a 4-minute video on some ground-breaking and interesting work our fisheries production staff has been doing.  Yes, our state fish hatcheries and fish production staff produce millions of fish for stocking in Nebraska waters every year.  Recently they also have been dabbling in the production of freshwater, native mussels as well.  Watch the video, you will get the idea:

Let me add some details to what the video told you.  Several species of freshwater mussels or “clams” are native to Nebraska waters.  Do to reductions in flows, installation of barriers, pollution, harvest, and other changes, many of our native mussel species have become much rarer than they used to be.  Freshwater mussels are indicators of good water quality and healthy environments, are considered the same as game fish, and are important parts of our native aquatic fauna.

If you want to know more about Nebraska’s freshwater mussels, the complete “bible” is this one:  A Guide to the Freshwater Mussels of Nebraska. One thing I think that is fun about our native mussels are the common names given to them:  Heelsplitter, Creeper, Deertoe, Fawnsfoot, Fatmucket, Floater, Lilliput, Mapleleaf, Pimpleback, Pistolgrip, Pocketbook, and the Wabash pigtoe.  Some of those are names that I am pretty sure would get you expelled from school if you uttered them on most grade school playgrounds anymore.

Oh, and do not forget the extremely rare Bucktooth Clam.

The life cycle of our freshwater mussels is fascinating.  Some of that was mentioned in the video at the beginning of this blog post, but let me emphasize that a little more. . . .

Mussel larvae are microscopic.  They are expelled by the thousands from female mussels.  In a few species those larvae, also called glochidia, may simply drift away, but in some of our native species the glochidia are transported by fish!  In fact some mussels are very specific in the species of fish that will transport their glochidia!  If the right species of fish are not present, the glochidia do not get distributed.

Transportation on fish is accomplished when glochidia are expelled from female mussels and attach, are parasitic, on the gills of fish!  Those parasitic glochidia then hitch a ride on the gills of their host fish, perhaps many miles upstream, where they eventually drop off, sink to the bottom, and grow into adults.  To enhance the likelihood that the glochidia will find the gills of a fish to attach to, some mussel species attract fish by waving their mantle in the water.  Again that was referenced in the first video in this blog, but this is so fascinating that I wanted to include a longer video of the display of the plain pocketbook mussel:

You can see the mantle of the mussel being waved in the water and you can see how it resembles a fish.  A real fish might come in looking for a meal or some company and then in close proximity to that female mussel become inoculated with mussel larvae.  Who would have thunk it?

As mentioned in the first video, plain pocketbook mussels have been produced at our North Platte State Fish Hatchery and already have been “stocked” in some waters in the Elkhorn River drainage.  It is way too early to evaluate how successful those stockings might be; sampling and evaluation will continue over the next several years.  However, one thing that has been noted thus far is that raccoons love clams on the half-shell!

Our freshwater mussels can produce pearls–any shellfish can get a parasite or foreign object that will eventually develop into something resembling a “pearl”.  However, do not go on a pearl expedition in any Nebraska waters as the harvest of any freshwater mussels is prohibited east of U.S. Highway 81 and is limited to 10 per day, 20 in the possession west of that highway.  Yes, there are some folks in addition to the raccoons that eat Nebraska “clams”.

There is concern about the status of many of our native mussel species and in fact many of them may no longer be found in Nebraska.  As I mentioned to begin with, there are many reasons for the declines and even disappearance of some of our native mussels.  Who cares and why?  I know there are those who will ask that question, and believe me, I understand as much as anyone that the more glamorous game fish are what pays the bills.  However, these freshwater mussels are native species and are indicative of healthy aquatic habitats–healthy habitats that will also produce lots of game fish.  Our native mussels are important parts of our aquatic ecosystems and all Nebraskans, especially those who fish, should appreciate that they are down there, and hopefully there will be more of them in the future!

EDITOR’S NOTE:  If you did not understand my obscure bucktooth clam joke in the middle of this post, go back and look closer at the drawing.  Look. . .think. . .”bucktooth” clam. . . .Ha.  Sorry, I have so few opportunities to use that material. 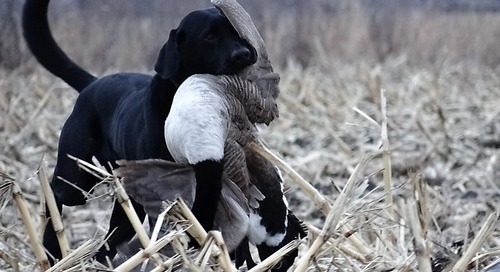 Why Hunting Is Important

With September just a one more quick flip my on NEBRASKAland magazine calendar, it is time once again to re...