Home » NEBRASKAland Magazine » My Time on the Lek
× Share this Article

My Time on the Lek

The thrill of the dance.

When the Pine Ridge Rangers erected a lek viewing blind on the Oglala National Grasslands, I jumped at the chance to experience the dance of the sharp-tailed grouse. For years I had researched private and public blinds. Distance and weather concerns kept me home, but this blind was nearby. I packed blankets, camera, water and snacks and made my way to the blind.

Flashlight in hand, I stowed my gear and settled in. Wrapped in the blind’s cocoon, I quietly waited. Shortly before twilight I heard the whoosh of wings and a solitary coo, followed by the rushing sound of dozens of wings and boisterous coos and warbles. I peeled open the portal hole coverings. Wonderment gave way to delight. Directly below were several males.

Fascinated, I watched them pair up, facing one another. They cooed and warbled. Then, feathers puffed out, each would crouch. One would rise and look around. Then the other. Suddenly, wings stiffly spread wide, purple air sac filled, rump up, head down, tail feathers on display, one would begin to dance. Rapidly stamping while the low staccato buzz of snapping tail feathers filled the air, the grouse turned in small circles and charged forward. The challenger would rise and they would face one another in a dance-off. This stamping was repeated across the lek as the males paired with first one, then another, challenger. The air was filled with sound.

Suddenly the birds froze. Silence fell. Observing females took note and, moments later, the ritual resumed. Males returned to their favored dance area and challengers zipped back and forth.

All was quiet. Shadows lifted. The light warmed. The grasslands were bathed in gold and dotted with patches of white wildflowers. From a nearby pond, frogs added their voice to the calls of red-winged blackbirds and meadowlarks. Then, with a whoosh of wings and boisterous calls, the grouse returned.

Golden light revealed a dozen pairs of males dotting the lek. The calls and sounds of the dance surrounded the blind. My favorites were the pair who claimed the area below me. Their dance often included a flight onto the blind’s roof where the pounding of stamping feet boomed.

As the light brightened I began to record. Males stomped and zipped around the lek. I barely knew who to keep my eye on when suddenly they were gone. With a dramatic swoop, the hawk had returned.

I remained. The grouse returned, but the dance was over. The birds lounged about, then dispersed. I followed, thrilled with my morning adventure.

You, too, can enjoy the thrill of the dance.

April is a freelance writer living in Hemingford. This is her first appearance in NEBRASKAland Magazine.

The post My Time on the Lek appeared first on NEBRASKALand Magazine. 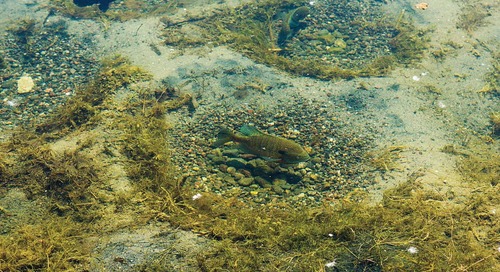