LINCOLN, Neb. – The second year of the Nebraska Upland Slam gave more than 200 hunters a reason to take advantage of the state’s excellent mixed-bag hunting opportunities.

In all, 122 hunters completed the Slam, including 107 from Nebraska. The remaining Slams were completed by hunters from nine states, including the only youth to do so, Blake Bohlender of Fort Collins, Colorado.

In an effort to encourage more hunters to go afield, this season, participating hunters who harvested at least one species were entered into monthly drawings for prizes. Awareness of the Slam grew nationwide, as hunters participated from 22 states across both years.

In the Slam’s second season, 274 hunters harvested at least one species, with a total of 764 submissions recorded. Just over half of these occurred on publicly accessible lands. The Slam also provided first-time experiences for 156 individuals across both years. Nearly 14% of all submissions were reported as the first-time a species had been harvested in a person’s lifetime.

Hunters who completed the Slam received an official certificate and pin and were entered into an end-of-year grand prize drawing from Pheasants/Quail Forever, which occurred at the Nebraska State Habitat Meeting on Feb. 1 in Kearney. Grand prize winner Jeff Duffey of Minden, Nebraska drew a Browning Silver 12-gauge semiautomatic shotgun, Lance Goings of Cherokee, Iowa won a Pheasants Forever print, and Benjamin Esker of Effingham, Illinois won an Orca cooler. The names of all hunters who successfully completed the Slam can be found at OutdoorNebraska.org/UplandSlamFinishers. 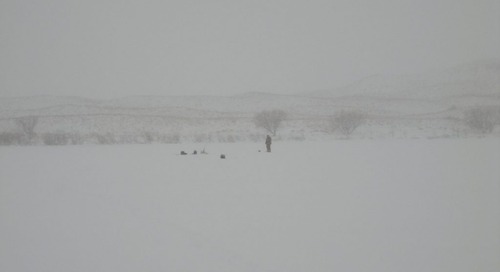 I wrote a blog a few months ago about “Sheep“. I have spent enough time on the ice to know that ice anglers...