I know next to nothing about Milk Fish.  They are a marine species, live in the Pacific Ocean, tropical waters.  Apparently, they feed on very small food items, plankton, algae, larvae and eggs, maybe some bugs.  Milk Fish have had the reputation of being impossible to catch on hook & line because of their feeding habits.  Their prey is so small that it is hard to imitate.  But, then I watched this video, and it got me to thinking. . . .

Some innovative fly anglers have been figuring out ways to catch Milk Fish, and they look like they have been having a lot of fun doing it!

Now you may be thinking, “OK, Mr. Nebraska Fish Biologist, who cares?  What does this have to do with anything in Nebraska or any fishing that might be done here?”  Well, maybe it does not have anything to do with fishing in our great state, but I wonder if there are not similarities between Milk Fish and some hard-to-catch fish species we have swimming in Nebraska waters?  For example, Asian Carp have certainly made their way into Nebraska’s Missouri River and up our tributaries to the Missouri.  In places those Asian Carp, Silver and Bighead Carp in particular, are abundant, but they are nearly impossible to legally catch on hook & line because they are filter feeders.  They filter plankton, algae and detritus out of the water.  Sure, you can snag them, but that is NOT a legal catch in Nebraska.  Most Asian Carp are harvested from our waters by bow-fishers, but is there a way for our rod & reel anglers to get in on the fun?  There are a lot of Asian Carp swimming around out there and if you could figure out a way to get them to eat a hook, you could catch all you want.

I know of fly anglers a lot closer than the Pacific to Nebraska who have already figured out some inventive ways to catch Common and Grass Carp.  Might there be some fly rod presentations that would turn the trick on Silvers and Bigheads too?  If it can be done with Milk Fish in the Pacific, how about Asian Carp in Nebraska?

From what I saw in that video clip, it looks like those fly anglers are sight-fishing for Milk Fish.  With more turbid waters, I imagine that might be next to impossible to do on Nebraska’s Missouri and Platte rivers.  However, I have seen videos and heard descriptions of schools of Asian Carp sitting in the current, just below the surface, filtering their food out of the water.  Those fish could be seen, and might there be some type of small fly that they would eat if it were drifted to them?

I have no answers.  This blog post is mostly me just “thinking out loud”.  I am hoping that maybe this sparks some interest, gets someone else’s “wheels a-turning”.  Got any ideas?  Think you could figure out a way to get a 50-pound Bighead Carp or a 20-pound crazy jumping Silver Carp to inhale a fly?  If you could, I am betting it would be a lot of fun, and you probably would not run out of fish to catch.  They ain’t half bad to eat either. 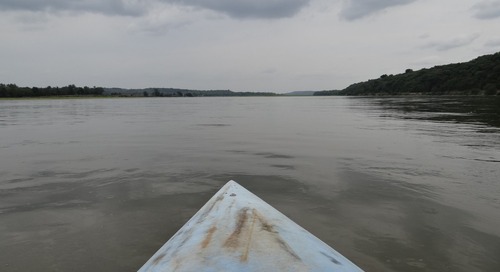 “They connect us. They run through us. Our bodies are roughly 60 percent water. Newborn babies are 78 perce...