Meanwhile On the Invasive Species Front. . . .

I hate that I even have to blog about this, and I know many have already heard, but everyone needs to be aware of what is happening on our waters.  I am going to spread this even more. . . .

Let me again start with the news release:

LINCOLN, Neb. – Microscopic young zebra mussels, known as veligers, recently were detected by the Nebraska Game and Parks Commission in a water sample collected at Glenn Cunningham Lake in late May. No adult zebra mussels were found in the lake.

Field sampling for adult zebra mussels will be completed on the Omaha lake’s boat ramps, rocks and other hard structures over the next several weeks. Until an adult is found, Glenn Cunningham Lake will be considered a suspect water body.

Each year, larval sampling takes place twice a month starting in May. All suspect water bodies have five samples collected in May and June and two per month in July, August and September. If no adults or additional larvae are found after three years of sampling, the lake will be delisted. The lake will be listed as an infested water body if an adult zebra mussel is found.

The Missouri River has an expanding zebra mussel population along its entire length downstream of Gavins Point Dam. Boats using the river are the likely source of introduction. Lewis and Clark Lake, Lake Yankton and the Offutt Base Lake are the only Nebraska waters that have established zebra mussel populations. Omaha’s Zorinsky Lake and Carter Lake are suspect water bodies, but no adult zebra mussels have been found at either reservoir.

It is important not to transport any lake or river water, mud, or plant material away from its source as that could transport aquatic invasive species to another water body. Young zebra mussels are too small to see with the naked eye, so they can be transported unintentionally with water in bilges, outboard motors, live wells and bait buckets. Adults can attach to boats, trailers and aquatic vegetation.

Boaters and anglers are encouraged to follow the Clean, Drain and Dry protocol to prevent the spread of zebra mussels. Visit neinvasives.com for details.

A zebra mussel is an aquatic invasive species that looks like a D-shaped clam, with alternating light and dark bands. Most zebra mussels are less than an inch long. They form dense colonies and filter large quantities of plankton from water, decreasing the food supply for native species. Mussels increase water clarity, causing increases in unwanted vegetation. In addition, these mussels create a hazard on swimming areas with their sharp shells, and they clog water intake pipes.

There are no effective treatments to control zebra mussels once they have infested a water body other than draining it to allow the mussels to either dry out or freeze.

For more information about zebra mussels, visit neinvasives.com or read the 2018 Nebraska Fishing Guide. Report any suspected observation of zebra mussels to Game and Parks at 402-471-5553.

Then, as I often do, let me offer some commentary:

First of all, no, this does not necessarily mean that Cunningham Reservoir is infested with zebra mussels.  All this means is what the news release says:  a suspect zebra mussel larvae was collected at Cunningham.  Under polarized light, under a microscope, here is what we are talking about: See it?  See the object with the “cross” just a little below and to the left of center?  That’s it.  For reference, it was 89 X 111 microns in size.  That is a SUSPECT zebra mussel veliger or larvae.  Other objects including other mussel larvae can look very similar under the microscope.  Seeing that suspect larvae does NOT mean for sure that it was even a zebra mussel larvae.  Further testing is needed to confirm whether that microscopic “target” is indeed a zebra mussel larvae.  However, we are looking, we are sampling, and when we find something like that, a waterbody is listed as “suspect” for zebra mussels.

You better believe additional sampling and monitoring will be done at Cunningham.  We especially will be on the look for adult zebra mussels and if those are found, then the listing goes from “suspect” to “confirmed”.

Unfortunately, I can tell you that the Missouri River from Lewis & Clark Reservoir downstream to Omaha and beyond definitely is infested with zebra mussels.  If you find some slack water and look for some rocks, you very likely will find adult zebra mussels.  What that means is every waterbody in Omaha is at a high risk for a zebra mussel invasion!  All it would take is one careless or clueless person to transport a cup of water from the Missouri River into another waterbody.  The zebra mussel larvae are microscopic, 89 X 111 micron microscopic, and CANNOT be seen.  It is imperative, that all Missouri River users know that transporting any water from one waterbody to another is not only risky but ILLEGAL.  All boaters on all waters need to practice CLEAN, DRAIN, and DRY, all the time, every time.

One thing I know for sure, we want to prevent their spread so we do not have to find out.

Might someone’s favorite sport fish benefit from the ecological changes brought about by zebra mussels?  Yep.  But someone else’s favorite species might be harmed.  Seems like either a selfish or a cavalier attitude to me.

I have said it before, the ecological impacts of invasive species are hard to predict.  Again, the only thing I know for sure is that we do not want to find out.  I also know that when it comes to zebra mussels, the more they spread, the more it is going to cost us, all of us. The post Meanwhile On the Invasive Species Front. . . . appeared first on NEBRASKALand Magazine. 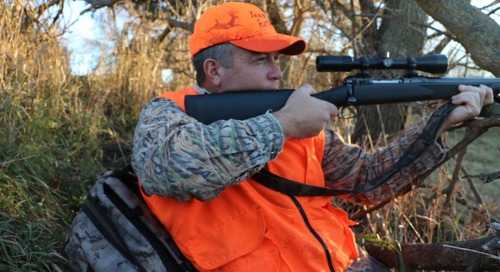 Plan Ahead for Hunter Ed

While it might be harder to think about hunting season when summer temperatures are getting into the high 9...