Lure of the Year – Buzzbaits

Find out why you should be using buzzbaits this year. Sometime last spring I had a conversation with longtime friend and fishing diehard Monte Mares of Seward. We were discussing our favorite lures and he told me that he loved to fish small crankbaits in the spring but, from then on, used buzzbaits. “The fish just can’t stand it!” he wrote me.

This last line kept me up at night last spring as I fumbled through my tacklebox, my eyes always coming back to the pile of buzzbaits that I often fished. But not often enough I soon learned.

On different public lakes, I watched all three of these fish species hit white buzzbaits on the chase. The catfish was especially memorable as it, and its slightly smaller brethren I caught a short time later, ran more than 20 feet to attack my noise-making lure on top.

For specifics, it’s no different than using any other lure. Adjust the retrieval speed, whether or not it is twitched as it moves, or the color. Also take a look at its size and sound. I’ve seen days when the loudest, clackiest buzzbait was the ticket, and others where subtlety was the key.

Regardless of what you choose, make sure you do make a choice by always having one tied on your second or third rod and reel.

Then hold on when you get a strike. For if you’re like me, you’ll only know one thing for certain when the fish hits – it’s a big one.  ■ Jeff is the editor of NEBRASKAland Magazine, a published author, photographer and loves the outdoors.

The post Lure of the Year – Buzzbaits appeared first on NEBRASKALand Magazine.

LINCOLN, Neb. – Private landowners have until June 15 to enroll their land in the Open Fields and Waters (O... 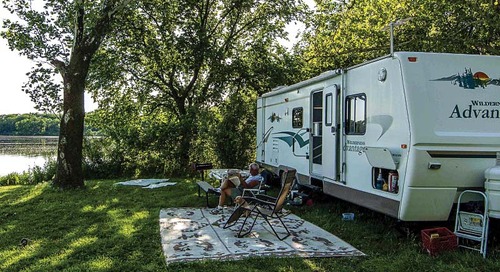 The Best Places for RVs in Nebraska 2018

You’ll be surprised by how many beautiful places in Nebraska recreational vehicles can visit. Many Game and...