I have been blessed to have opportunities to fish with some really good anglers.  Had another couple days on the ice deep in the Nebraska sandhills doing that again this winter.

It all started when a buddy let me know he had a legendary ice angler coming down to spend some time chasing big Nebraska bluegills.  He invited me to come out and fish with them.  It took some shuffling of my schedule, but I jumped at the chance.  Who wouldn’t have to share the ice with Dave Genz?

Now, if you are a hardcore ice angler, I do not need to introduce Dave Genz.  He literally is THE father of modern ice fishing.  You know all those flip-over ice shelters you see on the ice?  Well, they all started with the “Clam”.  Dave is the guy who “invented” the Clam, flip-over ice shelter and started selling them.  He is THE guy who pioneered the modern ice-fishing game, the mobility, the electronics, the gear.  The “boom” in the popularity of ice-fishing that has happened all across the ice belt, including Nebraska, was lit by Dave Genz.  Rightfully so, he is a member of the Fresh Water Fishing Hall of Fame.

Dave has ice-fished just about everywhere.  He has fished in Nebraska before and this trip brought his daughter along with him.  There was no agenda, no video-taping, no media, they just wanted to come to Nebraska to escape snow and cold and catch some big panfish.  I and a handful of other Nebraska ice-sticks, some other really good anglers, were invited to go along.  I still cannot believe I got the opportunity.

I do not really have a lot of stories to tell about our two days on the ice.  In fact we did not necessarily all stay together while we fished, we might have started and finished the day together, but in the course of fishing scattered to the four corners searching for and catching fish.  Of course we gathered to admire particularly nice fish and share observations.  You bet I have some pictures to show!

Let me start with Dave: His daughter Kathy could fish too!

Oh yes, the rest of us also caught fish, remember I said there were some other really good sticks in the party!

Don ended up with the biggest crappie, a 15-incher!

Naturally, Garrett got the biggest bluegill, a fish that was closer to 11 inches than it was 10! His brother Zack the biggest bass:

The rest of us got in on the act too, Swoaby scratched some big ‘gills: And so did Rob! Oh yes, I caught fish too! And that really is all there was–fishing, fishing hard, swapping stories, some during the day, but more over breakfast and supper.  What a glorious two days it was in those glorious Nebraska sandhills catching those glorious, big panfish!  Those really are a special place, special lakes, special fish, and as I said I was so blessed to share it with special people.

I mentioned in the beginning that our Minnesota guests have ice-fished everywhere, but wanted to come to Nebraska to get away from some snow and cold, enjoy some time fishing together, and catch big bluegills.  I am proud that we have some special fisheries in Nebraska along with the people and hospitality that can attract anglers like that!

I found this on the internet this week, the Angling Buzz has had a series of interviews this winter where they ask some of the best ice anglers a variety of questions.  The most recent one asked about their favorite ice-fishing location.  Pick up the video where Dave Genz replies EDITOR’S NOTE:  I have to admit that I “borrowed” some photos from FaceBook for this blog post.  I am ashamed to say that one day I forgot my camera, and I just could not be everywhere taking photos all the time.  So a big THANK YOU to Andrew and Kathy for the photos!  And Don, thanks again for the invitation and for spoiling me! 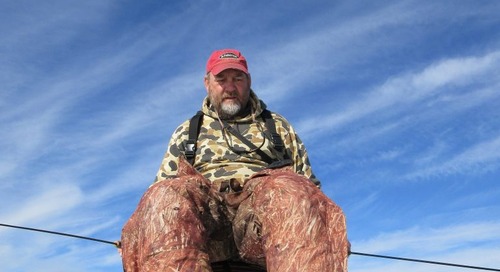 Puttin’ in Time at the Gym! 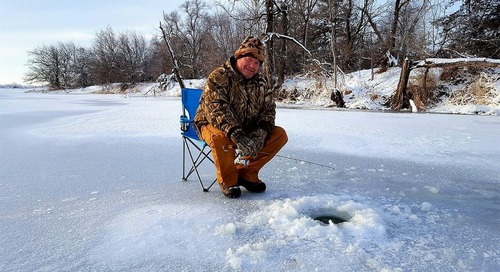 Why Walk On Water For Fins

In a casual conversation, whenever the topic of ice fishing is brought up, and I’m visiting with folks who ...