When doing seminars and workshops about Nebraska fishing I often note that we have no closed season for fishing in the state, and that I will spend at least some time fishing every month of the year.  An ideal autumn is one where I go from late fall, open-water fishing to first ice, ice-fishing in just a couple of weeks.  Likewise, I ride late ice as long as I can, as long as it is safe, and ideally transition to early spring, open-water fishing within a short period of time.  Last year I literally caught fish on late-ice and from open-water within hours on the same day (Fits and Starts).

This blog post I am going to give you the same kind of report, late ice and my first fish from open water for this year.  I know it is not exactly “fair” to tell you about fish my daughter and I were pulling through ice holes just a couple of weeks ago, because that ice is now gone, but those are the adventures I have been on lately.  At least you will see why I ride late ice as long as I can every winter; late ice usually produces the biggest panfish of not only the ice season, but the entire year!

We dried off some nice black crappies; of course she got the biggest. We also caught some really nice sunfish, lots of bluegills up to nine inches or so, but the biggest fish were all hybrid sunfish, in this case redear X bluegill hybrids. This will give you a little better idea of the size of those sunfish: I have played around with an electronic thermometer for several ice seasons, an electronic thermometer with a long lead wire.  You would be surprised how warm the water can be under the ice.  Ice cover stabilizes conditions under the ice.  On late ice, water temps. will even exceed 40 degrees F on a warm, sunny afternoon, and when you find those areas of warming water, you will find a bunch of big, hungry panfish!  That is why I religiously use my spud bar on late ice to make sure it is safe, but as long as it is, I am going to be on it!  Cannot wait until we have late ice again!

Another reason I ride the ice as long as I can is because through a hole those fish are relatively easy to catch.  Once the ice is gone, the water is very cold, conditions are very unstable, and the bite is very tough.  Oh sure, I know everyone comes down with “spring fever” and cannot wait to wet a line in open water, but I consider early spring one of the toughest times of the year to catch fish!

Regardless, many of us gotta fish, twelve months out of the year, so on early open water I am looking for any areas where the water may warm a few degrees and I am fishing slow.  No, not just slow, but S—–L—–O—–W.  You know how much water you cover when on the ice?  As soon as the ice is gone, only try to cover the same amount of water with open water presentations.

If you fish slow enough, on a pause you might feel weight on the end of the line, set the hook, and find this wallering around on the surface: 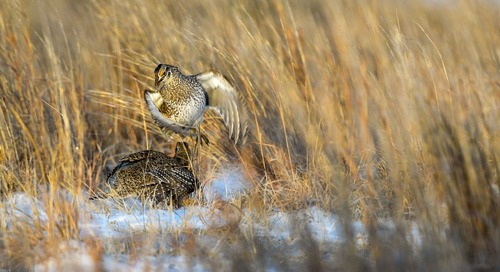 Prairie grouse dancing begins in mid-March and will last into May at a prairie near you. Read on for viewin... 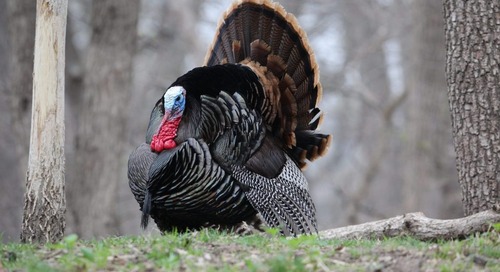