Prairie grouse dancing begins in mid-March and will last into May at a prairie near you. Read on for viewing locations.

There are some things you just have to see to believe, and others you have to hear. Few provide a treat to both of those senses like watching prairie grouse perform their courtship dances in the spring.

Sitting in a blind before first light, you will hear the birds fly into the lek before you can see them. When the greater prairie-chicken’s eerie, moaning call hits your ears, you will wonder what kind of creature could make such a noise, and then understand why their lek is also called a booming ground. And even after you’ve heard it, you still might not believe how much noise can be made by a sharp-tailed grouse clicking its tail feathers together. Sprinkle in the clucks, hoots, coos and squawks, and it’s music to a birdwatcher’s ears, or anyone’s for that matter.

Until darkness fades, you will strain your eyes until you find the source of the sounds. When the subject is clear, you might shake your head in wonder as you watch male sharptails inflate the purple air sacs on their necks, stomp their feet and dance in circles – or at the larger, orange air sacs of the prairie-chicken and its upright pinnae feathers. You will watch almost as intently as the males watch each other when they crouch low to the ground in a face-off. And you might wonder if any birds ever lose an eye when they launch themselves in the air and bare their claws at each other.

And they do it all just to try and get the girl, who will occasionally pop in on the lek to check on the boys, strolling through with a sense of indifference that causes them to try even harder to impress her.

The dance begins in mid-March and will last into May at a prairie near you. It’s something everyone should see and hear. And you still might not believe it.  ■

Nebraska has two species of prairie grouse: the greater prairie-chicken, found throughout central Nebraska and in some locations in the southeast, and the sharp-tailed grouse, found primarily in the Sandhills and Panhandle.

Males begin to arrive on leks in late February and remain into early May, but courtship displays don’t begin in earnest until mid-March, and activity peaks in mid-April. The best way to experience this unique ritual is from a lek-side blind. A list of these opportunities ranging from free, self-guided blinds on public land, to guided blind visits packaged with lodging and/or breakfast, follows.

Grouse arrive at leks well before sunrise. If you are using a public blind, plan on being settled in at least 45 minutes before sunrise and staying until the birds leave roughly 2 hours later so you do not disturb the lek. If possible, visit the day before so it will be easier to find your way in the dark. 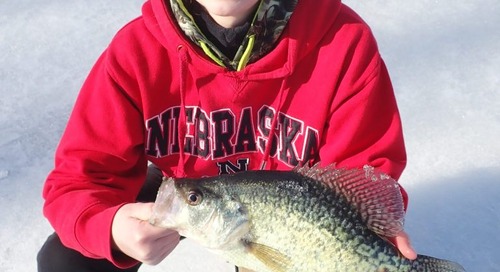 When doing seminars and workshops about Nebraska fishing I often note that we have no closed season for fis...