Just want to post up a few pictures from our ice-fishing clinic at Yanney Park in Kearney last Saturday.  We had a great time!

The Kearney ice clinic is a little bit different in that we do a classroom session in the morning.  The Environmental Resource Center Building there right beside the pit makes a great setting for the classroom session and we had 60-some people packed in there.  Don Cox, Andrew Svoboda, Rob Greer and myself rambled about a variety of ice-fishing topics, everything from safety and getting started to advanced ice-fishing tactics and gear.  I know we would all rather have just hit the ice and fished, it is a lot easier to learn that way too, but seriously, if you missed the classroom session, Don, Andrew, and Rob are three of the very best ice sticks in the state.  You shoulda been there!

As soon as we shut up, we headed to the north end of Yanney pit and hit the ice! We discovered it was a tough bite, so the on-ice clinic pretty much went from “basic” right to more advanced tactics of light line, small jigs, and watching the depth-finder screen! USA Ice Team member Rob Greer even broke out the palm rods, but that was not easy either. Late in the afternoon as everyone was gathering up gear and heading off the ice, I hooked a big fish, a lot bigger than the small largemouth bass, bluegill and crappies that were caught, but after a short fight, the hook pulled loose.  A few minutes later I hooked another.  Hook pulled loose on that one too.  What those fish were, I have no idea, never got a look.  Or maybe I am just telling a fish story? . . .

Let me say a few things about the Kearney ice clinic as I finish up.  The lake at Yanney Park is a typical Nebraska sandpit.  As such, with groundwater flow coming from the west, ice conditions are never as good as they are on other “non-pit” bodies of water.  We got on the ice on the north end of Yanney because ice conditions were better there, and we were VERY CAREFUL about where we went.  I would tell you that you have to be particularly careful on the ice of any pit or interstate lake in Nebraska even in the coldest of winters.  I would not bet that you could safely get on the ice at Yanney now.

In the past, due to ice conditions, we have canceled the on-ice portion of the Kearney clinic, and we were borderline to do that again this year.  It would be nice if we could find a different “non-pit” waterbody in the Kearney area for future ice clinics, someplace where we could count on ice conditions being better.  BUT, I think the classroom session is a fantastic addition to this clinic!  It is well-attended and I believe well-received.  I enjoy doing it, and I sure hope we continue to do that as well!

Regardless, we always have a great time at these clinics, and besides being some of the best anglers in the state, our volunteers are fantastic instructors!  I marveled at the patience and in-depth instructing that was happening last Saturday.  Again, a big THANK YOU to all who showed up to help, you guys are GREAT!

LINCOLN, Neb. – The Nebraska Game and Parks Commission is seeking information regarding the theft of ladder... 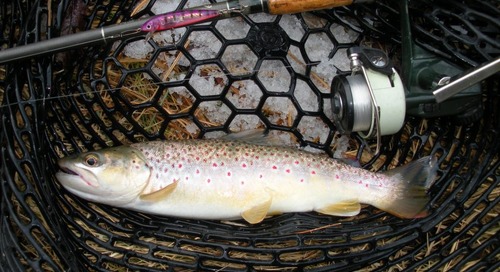 No Ice Required for this Winter Trout Fishing

If plopping your behind on a five-gallon bucket and then staring at a hole in the ice doesn’t meet your cri...