Home » NEBRASKAland Magazine » It Is That Time of Year, Again!
× Share this Article

It Is That Time of Year, Again!

I hate to repeat “stuff” on my blog, but when talking about fish and fishing, a lot of what happens occurs seasonally, at about the same time every year.  For example, it is early April and that means the walleyes are spawning.  Oh sure, the exact timing of the walleye spawn will vary a bit from year to year, but photoperiod or the amount of daylight is an important cue for the walleye spawn and thus it occurs about the same time every year.  The spawn does not all occur at once, some fish spawn early, some spawn late and the entire spawn lasts over a period of weeks.  I also always say that the males come early and stay late, so April 1 it is a pretty good bet that there will be some walleyes on the spawning habitat on Nebraska reservoirs, and they will be there for the next couple of weeks at least.

We plan to stock over 30 million walleyes in over 50 bodies of water in Nebraska this year.  Those walleyes have to come from somewhere, so when the walleyes start spawning, our state fisheries biologists and fish hatchery staff get after ’em!

As of April 1, a designated area along the dam at Sherman is closed to bank anglers and boats following sunset. The collection at Sherman will begin the night of April 4. Anglers and boaters are asked to avoid Nebraska Game and Parks boats and nets.

Depending on the collection results at Sherman, crews will begin collections at Merritt on or before April 7 and at McConaughy during the week of April 18.

The netting of walleyes will continue until the egg quota has been met. Gill netting along the dam at night will capture female walleyes, while an electroshocking boat will collect males. Spawning operations will take place on the lake during the mornings and fertilized eggs will be transferred to Nebraska state fish hatcheries for hatching.

Crews should finish work at Sherman by April 10, at Merritt by April 15 and at McConaughy by April 22, depending on netting success and weather.

Walleye egg collections are an annual rite of spring for most Nebraska Game & Parks Commission fisheries workers.  I do not get out in the field as much as I used to, but I usually spend at least a couple of days and nights helping collect walleye eggs each spring.  I have done that every year since I got out of grad. school and got a real job.  Over the years I have helped collect walleye eggs on Branched Oak, Elwood, Harlan, Sherman, and Merritt reservoirs.  Work goes on night and day, in good weather and bad, warm sunny days, cold freezing nights, wind, blizzards, rain, sleet and hail.  I have done it all, pulled off for lightning and a tornado warning once, but that was about the only break caused by inclement weather.  Our crews will do it all again this spring.

If you want to learn more about the entire walleye egg collecting project every spring, check out this old blog post, Easter Egg Hunt.

We handle thousands of adult walleyes each year during our egg collections, and you bet, we handle some of the biggest females in each reservoir.  How big those fish are of course depends on the body of water.  The adult spawners at McConaughy are very impressive.  For other Nebraska reservoirs, each year we will handle hundreds of female walleyes up to 8, maybe 9 pounds.  Those are big walleyes, but not unusual.  Once you start looking for fish that are legitimately larger than that, walleyes that honest-to-goodness weigh double digits, well, those are rare fish.  With the exception of McConaughy, we only will see a handful of adult female walleyes in excess of 10 pounds each year during our walleye egg collections.  I can think of a grand total of two female walleyes that I have seen during our egg collections that weighed 13 pounds, one at Harlan a long time ago, one at Sherman a few years back, and those were the biggest walleyes I have ever seen in person.

Fish are incredibly productive and depending on the species may produce thousands of eggs per female.  On average there will be about 120,000 eggs per quart of walleye eggs (it varies depending on the size of eggs).  The number of eggs we collect from each female walleye will depend on the size of the female, but an 8-9-pounder can produce a couple of quarts of eggs, as many as 1/4 million eggs from one female!

Male walleyes tend to be a lot smaller than the females, but the boys are no less productive.  Just one drop of walleye semen, also called “milt”, will contain enough sperm to fertilize thousands of eggs; one drop could fertilize the entire two quarts from one female.  When fertilizing the eggs in a pan, which we do, a few drops of milt, semen, from a couple, three male walleyes will be more than enough!  We like to say the key to high fertilization rates is “timeliness and distribution”!  Get the milt on the eggs as soon as possible and get it mixed in real well! The third primary feather from the left wing of a 3-year old wild turkey is necessary for proper stirring of the walleye eggs.  We always make sure to stir the eggs in a clockwise direction–we would not want un-screw them.  [EDITOR’S NOTE:  I apologize, after working night and day spawning walleyes for a few days, the humor is not very good]

Sometimes in the elements, in the wind and waves, in the push to collect all the eggs we need to get the job done. . . we get a few eggs on our faces. Cannot wait to get out there again!

The post It Is That Time of Year, Again! appeared first on NEBRASKALand Magazine.

LINCOLN – The Nebraska Game and Parks Commission will accept applications for a 2016 bighorn sheep lottery ... 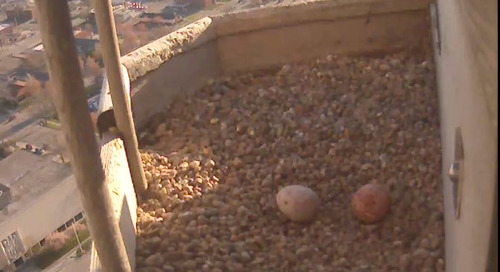 Either late Sunday or early Monday the female Peregrine Falcon laid egg #2. Egg #3 should appear in about t...