Home » NEBRASKAland Magazine » It is early April, and Walleye Love is in the Water!
× Share this Article

It is early April, and Walleye Love is in the Water!

I hate to repeat “stuff” on my blog, but when talking about fish and fishing, a lot of what happens occurs seasonally, at about the same time every year.  So, you might have read one of my blog posts a lot like this one before, but I have also learned that there are new folks reading this “stuff” all the time.

Every year about this time you can expect me to say something about the walleye spawn.  It is early April and that means the walleyes are spawning.  Oh sure, the exact timing of the walleye spawn will vary a bit from year to year, but photoperiod or the amount of daylight is an important cue for the walleye spawn and thus it occurs about the same time every year.  The spawn does not all occur at once, some fish spawn early, some spawn late and the entire spawn lasts over a period of weeks.  I also always say that the males come early and stay late, so April 1 it is a pretty good bet that there will be some walleyes on the spawning habitat in Nebraska reservoirs, and they will be there for the next couple of weeks at least.

We plan to stock close to 30 million walleyes in nearly 50 bodies of water across Nebraska this year.  Those walleyes have to come from somewhere, so when the walleyes start spawning, our state fisheries biologists and fish hatchery staff get after ’em!

Depending on the collection results at Sherman, crews will begin collections at Merritt on or before April 7 and at McConaughy during the week of April 10.

Crews should finish work at Sherman by April 7, at Merritt by April 14 and at McConaughy by April 21, depending on netting success and weather.

Nebraska Game and Parks this year is scheduled to stock nearly 30 million walleye, ranging in size from fry to 8-inch advance fingerlings, into public water bodies across the state.

We have produced a short video that explains the walleye egg collections; this refers specifically to Lake McConaughy a few years back, but the process is the same, every reservoir, every year.

Walleyes spawn mostly at night; to capture those spawners, we have crews that will work most of the night, especially when the spawning activity is peaking.  Female walleyes are captured in large-mesh gill nets set for about an hour at a time.  When working on a night crew running those nets, it is pretty much get the fish in, get them untangled as quickly and carefully as possible, into the live well, and then a quick boat ride back to the dock to deposit the fish into the holding cribs.  It is wet work, work, work under whatever conditions the weather happens to throw at you. Male walleyes also are collected at night primarily by electro-fishing boat.  Fish are “cribbed” in holding nets until the next morning.  Males in one crib: Big girls in another crib: In the mornings additional Fisheries staff shows up to sort through the fish collected during the night and spawn those that are ready (i.e. “ripe”).  Spawning is done in a pan, one female per pan, and then 3 males for each pan/female.  There are more than enough sperm in a single drop of milt from one male walleye to fertilize every egg in a pan, but we want fertilization to be as high as possible so we use three males.  I hope this picture is self-explanatory (if not, ask your parents about the “birds and the bees”). Care is taken to keep the pan, the female, and males as dry as possible while eggs and milt are expressed.  That seems odd, because, well, they are fish and they spawn in the water.  However, our goal is the highest rate of fertilization possible, and that can be accomplished by keeping the eggs and milt dry, and then mixing them thoroughly.  The 3rd primary feather from a 2-year old Tom turkey is critical for proper stirring and fertilization.  Oh, the eggs are only stirred in a clockwise direction!  (Yes, I repeat the same stupid jokes all the time too.)

Once the eggs and milt are mixed, THEN water is added.  Water activates the sperm.  By keeping everything as dry as possible until the eggs and milt have been thoroughly mixed, we can get the highest rate of fertilization possible!  Timeliness and distribution are key!

Once the “magic in the pan” is done, a slurry of clay is added to the walleye eggs.  Again, that sounds like the worse possible thing that could be done to freshly fertilized eggs, but there is a method to a pointy-headed fish biologist/fish culturist madness.  The clay is very fine, “Fuller’s earth” or “diatomaceous earth” and those fine clay particles coat the walleye eggs and keep them from clumping together.  If they clump, they do not circulate properly, and then fungus starts growing and all sorts of bad things happen.  Here is a jar full of walleye eggs on the right with the clay slurry, the jar on the left is being rinsed. When rinsing is done, the eggs are put in large coolers to be hauled back to the hatchery.  Here is what one of our “Easter baskets” will look like after a good morning! Once the fertilized eggs are hauled back to the state fish hatcheries at Calamus, Valentine, or North Platte, they are jarred up in jars exactly like those pictured above.  The walleye eggs roll, circulate, in those specially-made hatching jars for a period of days, usually around 10-14, depending on water temperatures, until they hatch.  After that, a bunch of walleyes are stocked around the state as 4-day old fry, while others are raised in hatchery ponds until they are approximately 40 days old and 1-2 inches before they are stocked.  Some will be raised until they are 6-8-inches long and stocked in the fall, but we do not stock nearly as many advanced fingerlings as we do fry and fingerling walleyes. The post It is early April, and Walleye Love is in the Water! appeared first on NEBRASKALand Magazine.

LINCOLN, Neb. – The Nebraska Game and Parks Commission will accept applications for a 2017 bighorn sheep lo... 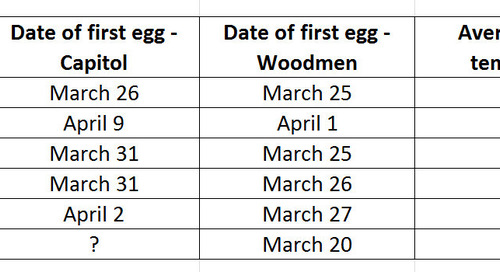 Back on 22 March on this blog, I made the brash and incorrect prediction that the Peregrine Falcons at the ...