Home » NEBRASKAland Magazine » It Is a Fish Eat Frog World!
× Share this Article

It Is a Fish Eat Frog World!

Recently I got “tagged” on FaceBook with a picture of a channel catfish that had been caught through the ice.

The fish was a little over 5 pounds, a very respectable channel cat, especially through an ice hole, but the big surprise came at the cleaning table when the stomach contents were examined:

Look close, it has been digested a bit, but laying just in front of the catfish’s head is a bullfrog that came out of that fish’s stomach!  How can that be?

All of our Nebraska frogs, with the exception of tree frogs, migrate from wet meadows, marshes and shorelines towards deeper water in the fall.  In many cases those froggies head into the deeper water of lakes, reservoirs, pits and ponds.  Once they get there they literally spend the winter hibernating on the bottom of the lake.  They lay in a posture just like the bullfrog in the photo above, stiff, not moving, like sculpted frogs.  No, they do not have to surface for oxygen, and under the ice they could not accomplish that if they wanted.  In their state of hibernation, they can absorb enough oxygen from the water, through their skin, to keep them alive all winter long.  As long as they have chosen to hibernate in water deep enough that it does not freeze all the way to the bottom, they sleep the winter away. . . .

Unless some big, bad predator comes along and slurps them up!  Yep, it is a “fish eat fish” world and if predator fish find some available source of prey, you can bet they will take advantage of it.  Many anglers would not be surprised that bass, pike and muskies clobber frogs during the summer, but they will slurp ’em off the bottom in the winter too!  But, it ain’t just the “usual suspects”, channel catfish are predators too, walleyes are known to target frogs in the fall and winter, and I have even found the remains of small frogs in the stomachs of sandhills yellow perch pulled through ice holes!

Being a pointy-headed fish biologist, food habits fascinate me, and as a lifelong angler I am keenly aware that an understanding of predator/prey dynamics is key to catching fish.  Knowing what they are eating gives us clues about where to find ’em and what to use to catch ’em.  Besides that, a channel catfish pulled through a January ice-hole with a bullfrog in its belly is just plain cool!

So, there are predator fish scarfing frogs off the bottom during the winter, now we need to find a baitshop that sells frogs in January?!  No, I am not saying that at all, and if that were the case, we would all be outta luck anyhow.  Consider that many times even if fish are feeding on a certain prey item, you may not necessarily have to imitate that prey item to get bit.  The knowledge of where prey is found, where it is abundant, can be enough to put us in the right spot, the area where fish are actively feeding, and then they may be relatively easy to catch whether we use exact imitations of a particular prey item or not.

I have caught a darned lot of walleyes in the fall, big ones too, in areas where frogs were migrating into the lake to spend the winter.  I never did catch a single one of those ‘eyes on a frog, but when they were chasing frogs, sometimes right up to the shoreline, they were “mobile, agile, and hostile”; if you put a jig or crankbait in front of them, it weren’t no frog, but you would be hooked up!

If you notice concentrations of frogs on shorelines on warm, fall evenings, that may give you some clues where there might be an abundance of hibernating frogs under the ice.  Chances are pretty good those spots would not have any type of structure or attract the attention of anglers, but if there are a bunch of frogs laying there, there will be at least some fish there to eat ’em.  However, on many bodies of water hibernating frogs may be laying on the bottom just about anywhere.  Fortunately, a lot of other fish food items are found near the bottom too, and just above bottom is always a good spot to start looking for fish under the ice.

Only one thing about that bullfrog-eating channel cat that really bothered me–It ate a pair of frog legs that I coulda ate! Thank you, Joe for letting me use your photos and tell your story!

The post It Is a Fish Eat Frog World! appeared first on NEBRASKALand Magazine. 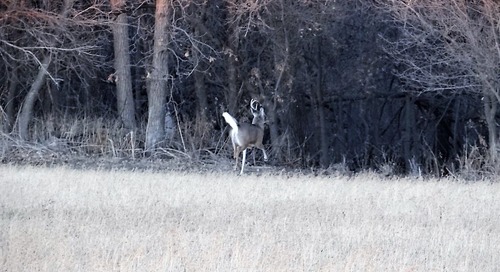 Shed Antlers: Another Reason to Explore Nature in Winter

Maybe you’re a hunter. Maybe you’re not. But, there’s a unique form of hunting you will enjoy. It is a chal... 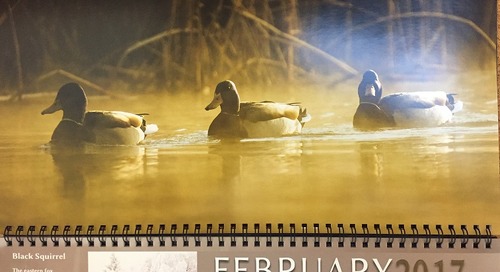 Time is important.  Most of us are constantly wishing for more time to spend doing what we love to do. This...