I will fish open water as late into the fall as possible.  Pretty sure I ain’t done yet.  But, with the relatively cold fall we have had, I cannot help but wonder, how long until we have ice?  How long until I can ice-fish?

Found a local reservoir that was 75% covered with a skim of ice last week!

Same reservoir was 100% open water this past weekend.

So, it is going to be awhile yet. I found this posted on FaceBook last week.  Yes, some of you will have seen this already, but some of you have not:  A recently retired refuge manager at the Valentine National Wildlife Refuge kept track of the dates he saw the first and last ice-anglers on those lakes.  The Valentine Refuge has been one of the most popular ice fishing destinations in the state for a long, long time.  You can bet there will be folks ice-fishing there as soon and as late as possible.  You can also bet that those relatively shallow waters in north-central Nebraska freeze, and hold ice about as long as any place in the state.  Over a twenty year period, from 1992 to 2012, the average date ice anglers were first observed was December 2.  The average date the last ice anglers were observed over that period was March 1.

I did not take the time to look back through all of my fishing notes, but I can tell you that in the past ten years, my average first day on the ice has been December 23.  My average last day on the ice over the past ten years has been February 27.  Many of my first and last days have been in north-central Nebraska, but not all of them.  It depended on the year and where I was able to travel.  Living in southeast Nebraska, my experience was skewed a little more to that part of the state.

If the ice is safe, I will be on it.  I can tell you that I have ice-fished as early as Thanksgiving weekend.  With the weather we had a couple of weeks ago, I was thinking that might be a possibility again this year.  Now, it looks like we will be waiting later.

I can also tell you that some of the best ice-fishing I have ever had has been in March, well into March.

That gives you a real good idea of what an “average” Nebraska ice season is like.  However, I will always tell you that in Nebraska “normal” is the average of the extremes.  Whenever we get safe ice, you might have about three months, maybe a hundred days, to ice-fish as much as possible.  Better “make hay while the sun shines”!

Obviously, water freezes when it reaches 32 degrees F.  However, that does not mean “lakes” will start capping over as soon as nighttime temperatures drop below freezing.  First, waters have to cool until they are close to freezing.  When you start seeing water temperatures in the upper 30’s, it is getting close.  Keep in mind that smaller volumes of water, smaller, shallower “lakes”, tend to freeze first and thaw first.  But, there are a lot of variables and it is hard to predict how soon ice will form.

Oh yes, it is science and there are formulae you can use to model ice formation (Lake Ice), but it is easier to tell you it is going to be a while yet.

Something else to look for. . . . When the time comes, I will invariably blog about ice safety!

Until then, be patient, it’s coming! Mark L., thanks for posting your data on FaceBook!  Hope you do not mind my using it.

The post How Long? appeared first on Nebraskaland Magazine. 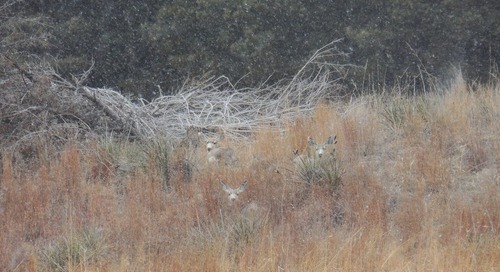 “Big, big weekend up at the lodge this weekend!”  Yep, it’s opening weekend of the Nebraska firearm deer se...