My standard greeting for a new dog I encounter is to hold out my hand and say, “Hi, Puppy!”  I do not know if the dogs like that greeting or not.  At least I have not been bitten yet.

I was walking around the neighborhood the other day and saw a pretty red dog watching me from someone’s backyard.  I think he wanted to come out and play: That was a good-looking dog, wonder where I could get one?

Even though I live in Lincoln it is not unusual to spot foxes and even coyotes.  Those sightings can send some city-slickers into a panic, but my family and I always keep our eyes open for all urban wildlife and especially furry predators.

In past springs we have spotted fox pups at a den not far from our house, so we are particularly on the look for foxes during the spring.

The “rest of the story” is that I spotted a couple of adult foxes not far from our home one afternoon, and watched as they trotted into a backyard.  Cruising through the neighborhood, I looked alongside a house and spotted a couple, three fox pups frolicking in someone’s backyard under the watchful eyes of the fox parents.  Of course when I returned with the camera, the pups never showed themselves again, but I captured one of the adults standing guard.

If you see me creeping around the neighborhood, don’t worry, I am just looking for foxes.

I wonder if the homeowner even knew they had a family of foxes in their backyard?

There was one other night early this spring when I was awakened by the sound of foxes barking outside.  At least they were close enough to my place that I could hear them!

Actually, there is a very healthy population of red fox in Lincoln city limits, Urban Foxes.  We sure have enough squirrels and rabbits for them to eat!

It makes my day anytime I spot wildlife like red fox near home.  After spotting the backyard fox, we frequently saw the adults in our neighborhood for a week or two, but not much after that.  Once the pups get old enough, I believe they are on the move quite often.  I am sure we will see them, or hear them, again one of these days!

Have a great weekend everyone!  Make sure to spend some time hunting or fishing this weekend, but even if you do not get outta town, keep your eyes peeled! 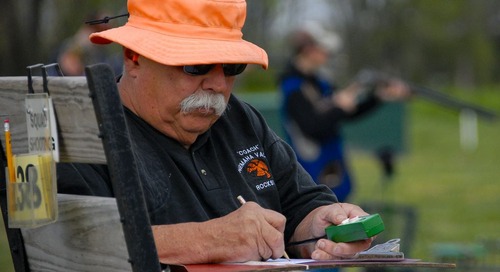 Hlavac a veteran of 44 Cornhusker Trapshoots