In spring 2004, I was attending a National Association of Interpretation certification and training program as a naturalist. The daily workshops were interesting, but as is often the case, the most memorable part of my trip took place during the meeting off-hours. I was spending the night in a cabin in the woods. I was also tired and very pregnant at the time, only a few weeks shy of my due date.

As I was trying to rest, I heard a scratching sound. The sound stopped, so I closed my eyes again. Several minutes later as I was dozing off, I heard the noise again. Other than the scratching, the cabin had been unusually quiet because my cabin mates were off on an evening adventure. I knew I wouldn’t be able to sleep until I figured out where the noise was coming from, so I rolled out of bed curious but also slightly afraid of what I might find.

After pacing through the cabin, I finally determined with certainty that the source of the scratching was coming from the interior of the large wood-burning stove. I couldn’t see through the closed cast iron doors, so instead I imagined what might be scratching around. I speculated that a bird could have fallen down the chimney and gotten stuck. It also occurred to me that there could be some larger animal like a raccoon in there, and I should proceed with caution.

I probably should have tried to contact someone with the park and waited on a maintenance person for assistance, particularly given my condition. But instead, I began searching closets for a flashlight and a pair of gloves. I found cleaning gloves but no flashlight. I grabbed the biggest blanket I could find. I thought a broom might be a good idea too just in case.
My three cabin mates sauntered through the front door about the same time and wondered what the pregnant lady with all the gear was up to. I explained the situation, and we all anxiously braced ourselves for the creature’s great reveal.

We slowly opened the wood-burning stove’s doors – lo and behold nothing but darkness. We held the blanket over the opening and began gently pushing the broom around the interior of the stove. Within seconds, something “flew” into the blanket. What was it? Nobody saw it, but nevertheless we now had it captured within the folds of the blanket!

It seemed as if the four of us were moving in almost perfect unison as we quickly and carefully exited with our mystery captive through the sliding doors onto the deck. We pulled the blanket open, ready to run away screaming if necessary. There it was – a little southern flying squirrel looking up at us with its sparkling big brown eyes and pink button nose.

It remained motionless at first as it assessed its new situation. Then in a split second, it jumped onto a branch overhanging the deck and was gone into the night. We all smiled and laughed, grateful that we had the opportunity to see a flying squirrel up close and that we successfully got him back to the trees where he belonged.

Southern flying squirrels are considered a threatened species in Nebraska. They are a nocturnal, woodland species found in the southeastern part of our state. Flying squirrels are omnivorous but rely heavily on oak and hickory mast production for their forage. Extensive stands of mature oak/hickory woodlands provide suitable nesting cavities. Flying squirrels do not hibernate during winter, but they will become less active and sometimes huddle together in tree cavities for shelter and warmth.

Their geographic range is limited when there are few woodlands that provide suitable habitat characteristics within our state. When old oaks and hickories are harvested or woodlands become fragmented or converted to other uses, food, cover, and nesting habitat for flying squirrels may be lost.

To conserve flying squirrels in southeastern Nebraska, management goals should include the maintenance of healthy woodland structure with native understory plants. Oak and hickory woodlands can be managed for multi-year age structure with plentiful large trees to provide nesting cavities. If timbering is part of management, cutting should ensure that an adequate number of large, well-spaced trees remain that can provide nesting sites. Minimum woodland stand size should be approximately two square miles. Control of invasive plants such as eastern red cedar and garlic mustard will also help in maintaining habitat for flying squirrels and numerous other wildlife species.

Southern flying squirrels don’t actually fly, but they have wing-like skin that extends from their front and hind paws that allows them to glide. Maybe if you’re in the right spot at the right time, you’ll be lucky enough to see a flying squirrel gliding from branch to branch. They are certainly much better off in the trees than our chimneys.  ■ 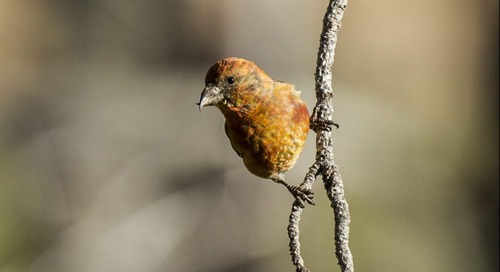 Correction: This corrects the times of the shows in the last sentence of the fourth paragraph. LINCOLN, Neb...