LINCOLN, Neb. – Much of Nebraska was devastated by flooding in 2019 and properties owned and managed by the Nebraska Game and Parks Commission were not immune to the damage. The destruction at some of Nebraskans’ favorite parks and wildlands is detailed in a story by regional editor Eric Fowler in the March issue of Nebraskaland Magazine.

Also, ecologist Chris Helzer writes about the history of conservation on his family’s quarter section of prairie near Stockham in Hamilton County, and staffer Renae Blum gives a first-hand account of her experiences with the Becoming and Outdoors-Woman program. The magazine also features regional editor Justin Haag’s photo spread of majestic Panhandle landforms paired with the sun and moon.

Introduced with the name Outdoor Nebraska in 1926, Nebraskaland is the conservation and parks magazine of the Nebraska Game and Parks Commission. With remarkable photography from staff and readers, the publication offers a wide variety of tips for enjoying the outdoors and stories about Nebraska’s natural resources and history.

The magazine is available by subscription or at retailers throughout the state. To subscribe or read the digital version, visit NebraskalandMagazine.com. 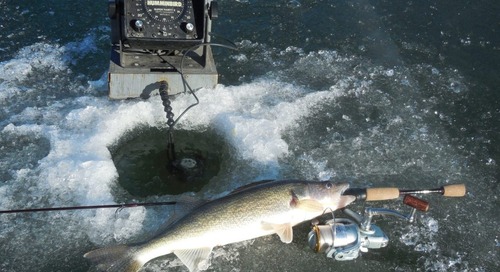 OK, I am fully aware that our ice-fishing season is coming to an end.  Maybe some of you will not even care...