Ever since my days as a wide-eyed graduate student, I have known that folks, especially outdoors- and fisher-folks, have a great interest in what we do as fisheries biologists.  Early in my career I took every opportunity to communicate with people the work and projects I was participating in, and over the years my job has evolved into one where I do that all the time!

However, it dawned on me last week that there are a lot of misconceptions, cussing and discussing, and just plain “baloney” about fisheries management and the work that fisheries biologists do.  So, I have been thinking that would be a great topic for a blog post.  Pull up a chair, class is in session. . . .

Let me start with the mission statement of the Nebraska Game & Parks Commission:

The mission of the Nebraska Game and Parks Commission is stewardship of the state’s fish, wildlife, park, and outdoor recreation resources in the best long-term interests of the people and those resources.

From my perspective, let me focus on the “fish” part of that mission statement, and let me define some more terms.

What is a “fishery”?

When you hear a pointy-headed fisheries biologist refer to a “fishery”, he or she is NOT referring to a fish hatchery.  No, the first day of fisheries science, in its most basic sense, we all learned that a fishery is made of of three parts:  1.  The fish and other aquatic creatures, 2.  The aquatic habitat, and 3. People.  The most basic definition of a fishery is where those three components overlap–that is a “fishery”.

Fish and other aquatic creatures

Of course, as anglers, we focus on the fish species we like to catch, and there are lots of them, although not every species can be found in every waterbody.  However, all the other components of the aquatic ecosystem are just as important if that ecosystem is going to be healthy, productive, and produce good fishing!  So, yes, fisheries biologists spend a lot of time sampling fish, but they also may spend time sampling other “critters” or even the plants and plankton that are found in a particular waterbody.  In many cases the health of those members of the lower levels of the aquatic ecosystem are just as important, if not more important, than the health of the fish anglers like to catch.

A variety of sampling gear can be used to collect fish and other aquatic plants and animals.  Electro-fishing gear and a variety of nets are used by fisheries biologists to collect fish.  Other specialized samplers, nets, and gear are used for the less obvious members of the aquatic ecosystem.  Typical information that biologists gather from those sampling efforts would be species present, relative abundance, sizes, growth rates, sex ratios, and more.  The annual Fishing Forecast would be a good example of a summary of some of that fish population data that is collected and how it is used.

To manipulate or manage the fish and other aquatic organisms, fisheries biologists will use several different tools and techniques.  Renovations are necessary in some cases to limit or remove unwanted species, and harvest regulations in their many forms are important tools.  Yes, fish stocking can be an important tool, but note that it is just one tool and is not more important than any other tool fisheries managers may employ.

As you may have gathered from the previous section, it is hard to distinguish between the habitat and the living creatures in that habitat–they are one, all part of the aquatic ecosystem.  So, in addition to the previous examples of the sampling fisheries biologists do, let me add that sampling of water quality, mapping of waterbodies, and quatification of different habitats and how they function are as important as knowing what fish are present.  A variety of water-testing techniques and gear can be used, some of it high-tech, some of it simple, “down and dirty”, in order to monitor the health of an aquatic habitat.  Also important is what happens on the landscape surrounding a waterbody because every “lake” is a reflection of its watershed.  Knowledge and quantification of land use and the terrestrial ecosystem is also important to a fisheries biologist.

Manipulation of aquatic habitat can be a big challenge, but certainly is NOT outside the realm of fisheries management.  Nebraska has been a front-runner in developing an entire funding source and program dedicated solely to the manipulation of aquatic habitat.  Over 25 years the Aquatic Habitat Program has been in existence, much effort has been put into the rehabilitation of habitats in aging, man-made reservoirs.  Much of that work has focused on improvements in the quality of the water entering those reservoirs, work that includes the watershed and its land use, but also improvements that can be made within the boundaries of reservoirs themselves (e.g. sediment retention structures, shoreline protection).  A variety of other aquatic habitat techniques have included habitat restoration in rivers and streams, spawning habitat enhancement, and protection and enhancement of certain critical habitats, even water itself, within larger waterbodies.  What aquatic habitat enhancement is NOT is just the placement of man-made fish attractors. Fish and fisheries do not exist in a vacuum.  We are not trying to preserve fish populations and aquatic habitats simply for the sake of preserving them.  We expect that humans will use and benefit from healthy fisheries!  Yes, the human dimension is part of every fishery, and I have often said working with fish, aquatic creatures, and aquatic habitat, is the easy part.  The real challenge lies in working with people!

Fisheries biologists can quantify the human element of a fishery using rigorous scientific techniques like angler surveys both on the water or through the mail or e-mail.  Interaction also occurs between pointy-headed fisheries biologists and the infinite diversity of anglers through more casual contact on an individual basis, or through public events like sport shows, seminars, workshops, and club meetings.  In the modern age, much interaction between anglers and biologists can occur on social media. End of lecture, time for a test. 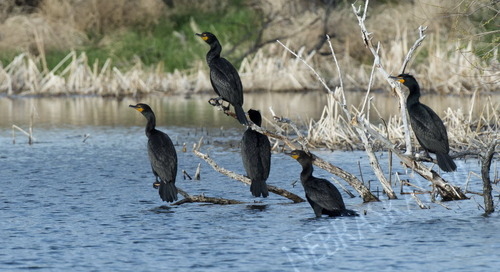 I know what I am going to post will be of interest to only a couple of small areas of Nebraska, but if you ...