A week ago I blogged about some fish handling issues that needed to be addressed according to recent reports from the water.  Actually, I do not know that folks really need another lesson on proper handling of fish that by law must be released, as much as they need an attitude adjustment.  I never know who reads my “stuff”, hopefully it made someone stop and think.

This week I want to return to the same topic, but I want to take it to another level. . . .

By this time, Walleye tournament anglers participating in the classic, catch, weigh-in, and release tournaments in Nebraska are aware of additional fish-handling rules.  If you want to see a copy of those rules, here is what they look like: Let me ramble a bit and explain how those rules came about. . . .

In Nebraska, we have treated tournament anglers the same as any other group of anglers.  They have been granted no special exemptions nor have there been special restrictions placed upon them.  Yes, it is easier that way, and from the standpoint of the resource, the fishery, the fish, tournament anglers are no different than any other anglers.  However, I have always told tournament anglers that “perception is reality”–they need to be very aware of the image they portray to non-tournament anglers.  When they have a successful tournament, the perception will be that they caught every fish in the “lake”.  If there is one dead fish that shows up at the weigh-in site the day after the tournament, the perception will be that tournament anglers killed every one of the fish they caught.  By the way, within the rules and regulations, competitive fishing events could harvest all the fish they caught if they wished, and believe me we have some “derbies” in Nebraska that do that.  However, most of the fishing organizations that hold fishing tournaments at least try to release as many fish as possible.

Having been at professional meetings with pointy-headed fish biologists from other states, I know that most restrictions placed on competitive fishing events came about after complaints of some type were lodged.  Again that emphasizes that perception is reality, and even if complaints are unfounded or there were no real impacts on fish populations, in other states, restrictions have been placed on competitive fishing events because someone complained loud enough about something that they did not like.

That happened in Nebraska during the heat of last summer when the quality of fish handling was questioned at a couple of Walleye tournaments.  I watched the weigh-in of a mid-summer Walleye tournament last summer.  Could the fish-handling have been better?  Oh yes, it could have been a lot better.  But, keep in mind that at that time of year, in those water and air temperatures, the damage had been done to those fish WAY BEFORE they ever arrived at the weigh-in.

Tournament anglers, all of you, Bass, Walleye, Catfish, Creek Chubs, I do not care what tournament it is, during the heat of the summer, you WILL HAVE MORTALITY during your tournament!  Do not think that because “every fish swam away” after the weigh-in that your survival was 100%.  It was NOT.  It is not unusual for fish to swim away from a weigh-in and die a couple, three days later.  That delayed mortality is tournament mortality as much as if you took that fish, dropped it on the bottom of the boat and jumped on it.  Yes, some species are less likely to die, and yes, there are things you can do to reduce mortality, but know this–if you are holding a catch-weigh-and-release tournament during the summer months, you are killing some fish.  Under the worst of conditions, mortality rates can be significant, more than 50%.

Let me digress for a moment again. . . . A big THANK YOU to the Nebraska Walleye Association, Nebraska Walleye Trail and Harlan Anglers Walleye Club for helping us on this.  You guys and gals made this a lot easier! So, tournament anglers, all of you, Bass, Walleye, Catfish and Creek Chub, how are you doing?  I will always tell you that the best chance ANY fish has to survive catch & release is to be placed back in the water from which it came, as soon as possible.  The longer it is held, the more it is handled, the warmer it is, the more it is jostled around in a “live” well, the higher tournament mortality will be.  The rules established for the Walleye tournaments in Nebraska are excellent guidelines for other species as well.  Can you adapt some of those?  There are more excellent ideas on handling tournament fish here, Keeping Bass Alive.  For the sake of the fish, can you do better?  How are you being perceived?

Catfish tournament anglers, yep, let me “pick on you” for a minute. . . . You have special challenges because of the size of fish you are handling.  I know, I know, Catfish have this mistaken reputation of being “bulletproof”, but reality is they are far from it.  Yes, their gill structure may actually allow them to survive outside of water for a marginally longer time than other species, but in reality they need the same water quality and dissolved oxygen.  There are no boat livewells large enough to provide that if you are holding dozens of pounds of Catfish.  Are there ways that could be handled better?

Again, I do not know who is reading my stuff and maybe no one cares.  Hopefully, I have thrown out some ideas that someone will think about.  How well is your fish handling during a tournament?  What kind of respect does that show for the resource and other anglers?  How are you being perceived?

You better believe you are being watched, and it does make a difference. Meat Processors May Apply for Hunters Helping the Hungry

LINCOLN – Meat processors have until July 20 to apply for participation in the 2016 Hunters Helping the Hun... 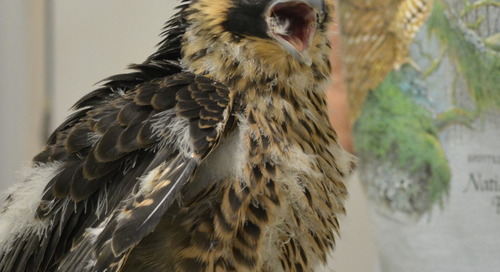 As has been reported elsewhere, a Peregrine Falcon eyas at the WoodmenLife Tower made a premature leap from...