Rabbit hunting is a cure for cabin fever.

With upland bird seasons closing Jan. 31, there’s not much to hunt in February besides rabbits.
February is actually my favorite month to hunt rabbits. I typically discourage my dog, Phantom, from pursuing rabbits, often ignoring her rabbit points so she remains focused on birds. But once February rolls around, we have some fun.

Look for cottontails near brush piles or thick shelterbelts. With a pointing dog, be prepared to kick some brush to get rabbits moving. A flushing dog will move them for you. Since most shots are at running rabbits, I like to use a little .410 shotgun.

Extra care must be taken when hunting rabbits with dogs. Unlike birds, which fly when flushed, a rabbit remains on the ground at dog level. Always know your dog’s location before pulling the trigger. If in doubt, don’t shoot. Cottontails tend to run in a circular pattern, so there will be more opportunities soon enough.

Still-hunting solo through shelterbelts or river bottoms with a scoped .22 rifle can also be productive, especially if there’s snow on the ground to make rabbits more visible. Plus, it’s good practice for deer season.

Jackrabbits can be found in open pastures year-round. Once flushed, they tend to run in a straight line and keep going. A shotgun is a good choice, and a 12-gauge is not too much gun, since jacks can weigh up to eight pounds. 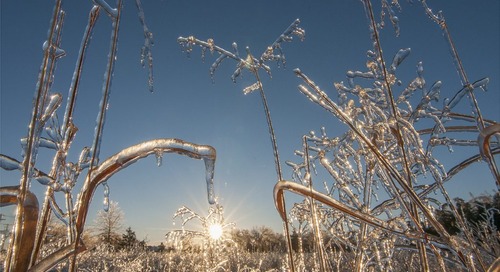 Photographs after an ice storm. I woke up on the morning of January 17 with a clear plan of attack. The big... 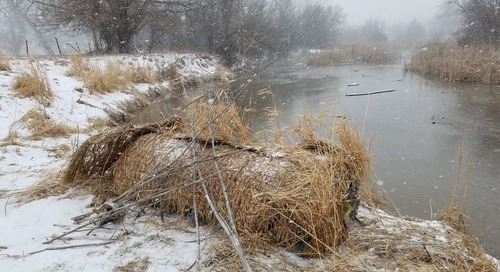 Tips from Nebraskaland photographers on how to keep warm. Each year, the contributors to Nebraskaland Magaz...