I will fish every month, every year, somewhere in Nebraska for some species of fish.  However, I will confess that there are certain times of the year when I am a lot more serious about my fishing.

You might be surprised to know that spring is not my favorite time to be on the water.  There are a lot better times when the weather is more consistent, the fish are less interested in reproduction and more interested in feeding, and there are a lot less anglers.  Besides that, gobbling turkeys distract me from fishing.

Likewise, I may not fish a lot during the heat of summer.  I might slip out for some early mornings, evenings, or after dark, but I avoid the heat of the day, and again all the other users on the water during the summer.

Then fall rolls around.  From then until the ice melts off the following spring, I fish hard!  In my opinion, fall is some of the best fishing of the year followed by more of the best fishing of the year on ice.  So now, while I am still waiting for safe ice, let me show a few pictures of fish that got dried off this past fall.  All of these fish were caught and released, it is too late to catch ’em this fall, maybe next year.

Year-around, I am always trying to stay versatile, to fish for a variety of species.  While it is still relatively warm, I like to dry off a few flatties. As you can see, there were no real monsters, but I caught several respectable fish a couple of nights.

Weather trumps everything.  There is no doubt weather conditions were a big player in all of 2019.  I had several trips impacted by weather this year including some this fall.  Autumn started off warm and stable, but once it started to cool, it cooled fast.  Unfortunately, that meant my fall bite did not last as long as I would have liked.  Water temps. dropped like ten degrees each week.  So, when my shoreline flathead bite was done for the year, I shifted attention towards something a little more cool: Largemouth bass are definitely warm-water fish, but I usually catch a few of them well into late fall.  This year was no exception, although I caught no real bruisers. Last, but certainly not least, the water is just warm enough to be liquid, and cold-water species become the target.  I have already used this photo, but it was a really nice trout and I am going to post it again:

That is all for now.  That last fish was just a couple of weeks ago.

Since then, yes, I have been checking ice conditions.  The waters I have been on have not been near thick enough, yet.  Regrettably, the forecast for the next few days ain’t looking good.  So, I do not know when I will have more fish pictures to show.  Soon, I hope! 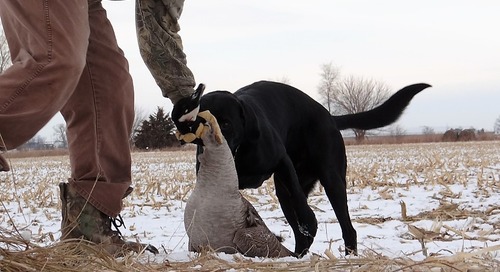 The holiday season, arrival of the new year and football bowl games bring an assortment of wild game from f...

LINCOLN, Neb. – Due to deer depredation issues, Nebraska’s late antlerless season has been extended in the ...