LINCOLN – Fontenelle Forest’s Raptor Recovery, with assistance from the Nebraska Game and Parks Commission and the Office of the Capitol Commission, released the male peregrine falcon, 19/K, from the 18th floor of the Nebraska Capitol on Oct. 3.

19/K was found on the ground in Lincoln on June 6 with a dislocated elbow. He spent the last several months being treated by Raptor Recovery and recuperating at its facility near Elmwood, Nebraska. The release was a success, as 19/K successfully circled around the Capitol for several minutes before lighting on a ledge on the 14th floor.

19/K was hatched in Des Moines, Iowa, in 2001. He and his mate, Alley, first nested at the Capitol in 2005 and have raised 23 young over the last 12 years, including this year’s lone offspring, Dinan. 19/K and Alley are the only peregrine falcons that have successfully nested at the Capitol. 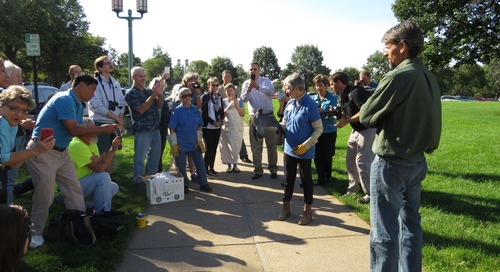