It is the time of year when folklore and science start to collide. But, about what?  I’ll tell you what. Morel mushrooms! The two aspects of nature begin to clash bout the emergence of the prized, delectable morel mushroom. So, let the coffee shop conversations and the biological banter begin!

These are just some of nature’s triggers that prompt longtime gatherers of the succulent morel mushroom to take to their favorite river bottom woodlands.

Are the bur oak leaf buds the size of a fox squirrel’s ear?  Are any woodland violets sprouting? Have wild asparagus spears begun to break the earth yet?  Have you done that first mowing of your lawn?

It is the time of year when those of us who like to harvest morel mushrooms ponder the question: “Will we see an early morel mushroom harvest season this year?” Maybe yes, perhaps no.

For the record, I personally have harvested morels as early as March 20th in southeastern Nebraska along the Platte River!

Be that as it may, timing is of quintessence for morel mushrooms to appear. In my view, their initial arrival often coincides with or just after the opening of Nebraska’s spring archery wild turkey hunting season (March 25th).

However, morel mushrooms remain quite mysterious and maddeningly elusive. It seems they can appear overnight and be gone after several days when the wind changes direction!

Mycologists who specialize in the study of fungi will explain to you that the emergence of morel mushrooms varies from year to year with the advance of spring weather, soil temperature and moisture. According to most mycologists, the ground temperature for morels to push through the soil typically needs to be fifty degrees at four to six inches below the surface.

Many plants actually follow a similar pattern so one of the more reliable indicators of when to look for morels is to be mindful of when more easily observed plants begin to grow, when buds are opening or when they flower.

As an example in the wild, along the Missouri River, avid morel mushroom hunters key into jack-in-the-pulpits, May-apples, ferns and phlox. Morel mushrooms are often found amid these plants in the same combination of soil, moisture, slope and sunlight preferred by the mushrooms.

It has often been said by veteran morel mushroom hunters that rain or snow showers followed by warm spring days really trigger the morels to “pop” in the same locations each spring. Those of us who have pursued the mighty morel frequently check our coveted, secret spots every few days for it with sort of a quiet, possessive enthusiasm on par to that of any deer hunter checking their trail cameras.

To scout for early season morels, a seeker of the treasured, scrumptious fungi needs to look over any south-facing slopes of woodlands with loose soils and high humidity where sunlight can penetrate to the ground near decaying organic matter. Some say that finding early season morels is like fishing a farm pond or sandpit lake for largemouth bass. An area is searched until you find one or two, then the pace is slowed and that area is more carefully worked. A pattern can even be established for the day.

I find that morels often grow around those dead and dying trees or their stumps where rays of sunlight can penetrate and some green vegetation can be seen. Early season morel varieties prefer very loamy soil. That means well-drained, moist but not wet soil with a good mix of clay, sand, decaying matter, calcium and/or lime. Old-growth tree river bottoms, particularly those in eastern Nebraska, make for the best early season morel hunting grounds. The loose, sandy soils with lots of humus near the bases of dead or dying cottonwood trees are often magnets for locating morels! Furthermore, when a hardwood tree such as a cottonwood reaches the stage of decay where its bark is falling off its trunk you then typically will find lots of morel mushrooms around it!

The good thing though is that not all of the morels in an area come up at the same time. Morchella ordinarily appears for a two to three week period, if not a bit longer, depending on conditions. Individually, a morel mushroom emerges, grows, and dries within about four to six days.

Anyone going morel mushroom hunting is reminded that he or she must get permission before venturing onto private property, whether it is posted or not. Hobby picking (non-commercial picking) for morel mushrooms is allowed on Nebraska Game and Parks Commission owned and controlled properties, unless signed otherwise. A current, valid state park permit is required on motor vehicles entering state park lands.

Among the necessary pieces of equipment for hunting morel mushrooms are a well-vented collection basket, bag or bucket, pocket knife, walking stick, bottle of water, camera and GPS unit or Smartphone.

Do not intentionally disturb wildlife and their homes (nests, dens, etc.) And, make certain to pack out all trash and recyclables.

Mushroom hunting is a wonderful, healthy family oriented outdoor activity so to get the kids involved!

Blogger’s Note: Morel mushrooms are extremely popular, and becoming more so with each passing harvest. Professional chefs treasure them, home cooks love them, and mushroom foragers long for the thrill of the hunt.

Morels have garnered so much attention that the Nebraska Game and Parks Commission has devoted a portion of its website for reports, recipes and complete information on the fungi. Go here to access it. 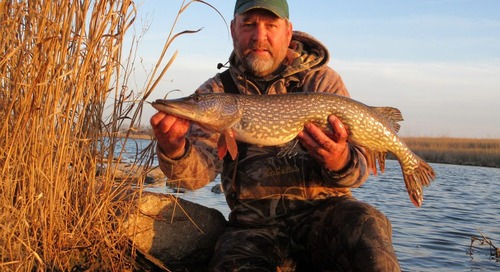 So far this has been a typical early spring in Nebraska.  We have had beautiful warm days that have everyon...