It won’t be long. The first of the duck seasons almost is upon us.

The Nebraska Game and Parks Commission and Ducks Unlimited are proud to bring back the popular Nebraska Duck Slam, a challenge for duck hunters to take advantage of Nebraska’s great duck hunting opportunities.

The Duck Slam challenges hunters to harvest a teal (blue-winged or green-winged) of either sex, as well as drakes of three other species: an American wigeon, a mallard and a northern pintail. All ducks must be harvested in Nebraska, and hunters must upload a photo of each harvest at OutdoorNebraska.org/DuckSlam.

Those who successfully complete the slam will receive an official certificate, a Duck Slam pin and Central Flyway bragging rights. Additionally, all hunters who complete the Slam during the 2022-2023 season will be registered to win one of several great prizes generously donated by Ducks Unlimited. A drawing for the grand prize, a Ducks Unlimited Special Edition Franchi Affinity Elite 12-gauge semi-automatic shotgun, will take place next February.

The Duck Slam officially opens on Sept. 3, the first day of early teal season, and runs through Jan. 25, 2023, when duck and coot season ends in zones 2 and 3. Season dates vary by species and zones. Blending recreation and conservation By Grace Gaard, Outdoor Educator When we think of kayaking, we might p... 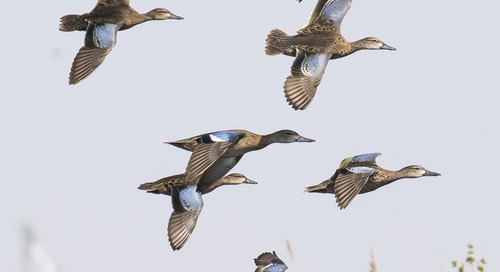 Wetland water conditions poor across much of Nebraska

Wetland water conditions across the state are poor, with most wetlands in the Rainwater Basin dry, accordin...