DiVentures in Omaha has become one of the largest scuba schools in the Midwest.

As Dean Hollis began to think about how he wanted to spend his retirement, his thoughts kept returning to the water.

Hollis grew up in Florida “on, in and under the water.” When a career with ConAgra brought him to land-locked Omaha, he continued to spend time scuba diving, swimming, boating and water skiing. When he retired as Conagra’s Chief Operating Officer in 2008, he imagined opening a tiki-themed dive shop with Adirondack chairs in the storefront of a shopping center.

After spending a career in business, though, Hollis couldn’t open a shop without first doing his research. He talked to hundreds of dive shops, and as he did, he began to revise his plan. The small shop he envisioned grew larger and larger. The services it offered multiplied.

In 2009, he opened DiVentures, a full-service scuba shop at 4303 S. 121st Plaza in Omaha. There, customers can become scuba-certified, rent and buy equipment, take swimming lessons and book scuba trips to places like Cozumel, Cuba, Fiji and the Galapagos.

“You won’t find a scuba shop like this anywhere in North America,” Hollis said. “It’s a one-stop shop.”
Nearly a decade after opening, DiVentures certifies more scuba divers than any other shop in North America, Hollis said. After realizing Omaha had a shortage of swimming schools, Hollis began offering lessons for both youth and adults.

Now thousands of students learn to swim at DiVentures each year, first becoming acquainted with the basics of water safety and, in many cases, eventually becoming scuba-certified. Hollis has expanded from one location to six throughout the Midwest. In the process, Hollis has become a player in both local and international aquatic awareness, education and conservation efforts.

On the surface, the success of DiVentures may seem strange. A bustling scuba school in the most landlocked state in the nation? To Hollis, though, the success of DiVentures makes a lot of sense. Surveys have shown that over 40 percent of people would like to learn to scuba dive, Hollis said. Less than 1 percent actually do. Naturally, the opportunities to learn are slimmer in places like Nebraska, which lack pristine beaches and clear lakes, than in places situated on large bodies of water. There was a need, and Hollis was happy to fill it.

Just as Hollis didn’t plan to open a chain of swim and scuba schools, he didn’t plan to become an aquatic conservationist. Shortly after DiVentures opened, Hollis began organizing dive trips for his scuba students. The divers were interested in the fish and other aquatic creatures they saw beneath the water, so Hollis began inviting marine biologists and researchers from the places they visited to talk about the species and ecosystems the divers got to see.

These talks were a hit, Hollis said. The divers were rapt. They asked questions. Inevitably, one of those questions was “what can I do?”

Visiting a place – even just once – and seeing an underwater environment that most people don’t, had a strong impact on many of the divers.

“It’s hard to convince someone to conserve something they haven’t seen,” said Hollis.
They had seen the fish, the sea turtles, the coral reefs. Now they cared about them.
Hollis saw an opportunity here, too.

He began working more closely with the biologists and researchers who had talked to his students, and he found opportunities for divers to aid researchers in their conservation efforts.

DiVentures divers have tagged sea turtles, hammerhead sharks and great white sharks so researchers can track these animals and learn more about their migration habits and other behaviors. DiVentures staff are working with the Henry Doorly Zoo in Omaha on a coral propagation program, in which divers there will painstakingly place coral on the ocean floor.

These trips make divers feel like they’re helping do their part. Additionally, Hollis has found that his customers value once-in-a-lifetime experiences like these over just about anything they could buy.

All of these things – the research trips, the talks, the act of experiencing underwater landscapes – help amplify the message of conservation.

“All those little barks turn into one big roar,” Hollis said.

Locally, Hollis is involved in education and conservation efforts, too. DiVentures participated in the 2018 Missouri River Outdoor Expo at Ponca State Park, conducing a program introducing visitors to snorkeling and scuba diving.

“Dean (Hollis) has built a culture where his customers are curious, they’re engaged with the natural world, and they’re inspired to help conserve an environment that is important to them for future generations. That mission is really parallel to ours,” said Jim Douglas, director of the Nebraska Game and Parks Commission.

DiVentures may not be the small, tiki dive shop that Hollis initially envisioned running in retirement. But he’s doing what he loves, he’s helping others do the same, and his business is inspiring Nebraskans to learn and care about ecosystems they might not otherwise see.
“It’s pretty neat to be doing this from Omaha,” Hollis said.  ■ 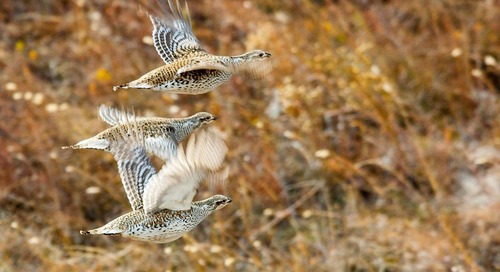 An Upland Slam … In Two Days