CHADRON – As many as 45 disc golfers are expected to compete Saturday, May 27, in the first Chadron State Park Gateway 3-disc Challenge, a tournament set at the park’s popular course which was recently expanded from nine to 18 holes with many new baskets and the addition of concrete tee boxes.

Tournament organizer Jesse Ottman of Alliance said 33 players had signed up by Monday morning, already exceeding his expectations for turnout. He said many players are bringing campers and plan to enjoy the park with their families throughout Memorial Day weekend.

The tournament, sponsored by Gateway Disc Sports, includes three complementary discs with each registration. The three discs will be the only ones allowed for each competitor during the tournament.

“Whatever you start with you have to finish with,” Ottman said. “If you lose one of the discs in the trees, you’re down to two.”

Ottman said the tournament’s entry fee of $25 is a way for golfers to get discs at lower cost than they can often be found at retail prices. Many other prizes also will be awarded as each player competes in one of four divisions: advanced, intermediate, recreational and women’s recreational.

The event will begin at 10 a.m. with a players meeting at the practice tee near the park’s pond. Tee off with a shotgun start is set for 10:30 a.m.

Players who are interested in participating may contact Ottman at 307-534-6478. They also may register online by visiting the “tournaments” link at discgolfscene.com. [Direct link]

Rains cause flooding on some southeast WMAs 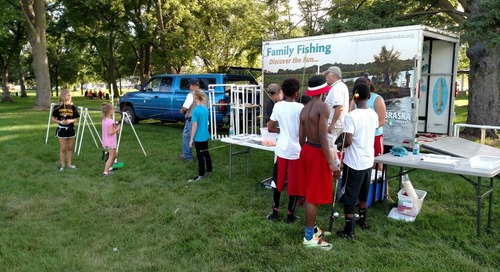 I know this is not new news and in fact some of our family fishing events for this summer have already occu...