A couple of weeks ago one of my many fishing contacts suggested that there are a lot of misconceptions about the spawn period for our big three catfish species, blue, channel and flathead.  He thought that might be a good topic for a blog post and I agree with him!

Our large catfish species in Nebraska are definitely warm-water fish.  In fact, they are some of the slowest-growing fish in our waters because they are warm-water fish, and we are anything but a southern state.  They are so “warm-water” that they are the last fish to spawn in the summer.  June and well into July is when our large catfish species are spawning in Nebraska waters.  Blue catfish tend to be the most “cool” of those three warm-water, catfish species, and will spawn a little earlier than channels and flatheads.  Blue catfish spawning will tend to be in June, maybe the last part of June in Nebraska waters while spawning activity for channel catfish will typically be in late June into July and certainly well into July for flathead spawning.

Our large catfish species are cavity spawners–they like to spawn in a hole or cavity of some sort.  Habitat like over-hanging banks, hollow submerged logs, and beaver dens are ideal cavity habitats, but spawning cats will also make due with crevices in rocky rip-rap habitat or even with other types of cover objects if there are no good holes in which to spawn.  Male catfish find prospective spawning sites and then defend those locations.  I have blogged before about how territorial those male catfish can be and how rough they are on each other.  If you have seen the nature shows on TV where the bull buffalo are fighting each other, those same kind of battles are happening below the surface of our waters during the catfish spawn.  Subsequently, male catfish are no less rough on the females as they grab them and try to convince them to spawn. Hand-fishing or noodling is NOT legal in Nebraska, and the main reason for that is the vulnerability of adult catfish while they are guarding their spawning sites.  You bet those fish will grab a hand or leg if stuck into their spawning hole, and harvest of those adult catfish, some of the largest and oldest in a population, off their spawn bed, can have a significant impact especially in a northern state where those fish are dozens of years old.

In Nebraska rivers our large catfish will definitely move upstream to spawn and will move out of the main river into tributaries.  The same kind of migration occurs in some Nebraska reservoirs where catfish move out of the reservoir upstream into a river or feeder streams.  However, in other lakes, reservoirs, pits and ponds, all catfish spawning activity will be confined to the main body of that standing water.

Catfish are very capable of reproducing in just about any body of water.  They will utilize any cavities or cover objects they can find.  However, there is a difference between reproducing young catfish and those catfish surviving to recruit to the population.  Everything loves to eat small catfish!  In waters with an abundance of predators, largemouth bass, walleyes, etc., catfish recruitment often is low because the small catfish that are produced all get gobbled-up.  Catfish that migrate upstream into feeder streams where there are fewer predator fish may still be able to produce young recruits for that population.  However, in other cases, catfish populations are supplemented if not maintained by the stocking of catfish large enough to avoid predation.

Once spawning activity starts, the bite slows.  It is not that catfish will not eat while they are spawning, but they have things other than finding and capturing food on their mind.  If you drop a bait in front of them they will still bite, and that gives you some clues as to how they can be caught during the spawn.  Remember the males establish and guard a spawning “nest”, drop something on or near that nest or spawning territory, and they will still smack it.  During the spawn, they will not be moving, looking for food, so dipping and dabbling baits into likely spots will be the best way to find them.  Females will resume roaming and looking for food soon after they deposit eggs.  The catfish bite in Nebraska waters picks back up in August and continues strong into fall when it again tapers off as the water cools.

I have commented a couple of times this year that it seems as though everywhere I have fished I have had channel cats smacking artificial baits.  I have not been targeting those fish, but have had plenty of them eat swimbaits and crankbaits this year.  I believe that has likely been the result of our weather patterns this spring and summer–we were relatively cold through most of the spring well into May when it then heated rapidly to warmer-than-average.  Spring is pre-spawn period for our large catfish species, and once the water warmed in late spring this year I believe the channel cats were drawn into shallow water and were very active looking for food.  They have stayed that way right up until spawning.

In most people’s opinion, catfish will not win any beauty contests.  As the spawn period approaches you might see some differences in body shape and color between the sexes, especially in channel catfish.  Male channels tend to darken and their heads tend to swell, become more bulbous.  This often leads to mistaken identification because the males can look so much different than the females (Catfish ID).

One more thing about our large catfish species and some misconceptions about them;  A catfish ain’t just a catfish.  Although their spawning habits are similar, blues, channels and flatheads are three distinct species, and distinctly different fish.  They are NOT just scavengers that swim around eating smelly, dead stuff off of the bottom.  Oh sure, channel catfish are definitely omnivorous and will eat a variety of food items including critters that have died and drifted to the bottom.  But even then, channel cats, especially large channel cats, are much more the predator than folks realize.  Likewise, blue catfish are very much predator fish and most of the time are predators on other fish, and perhaps mussels or clams.  In Nebraska reservoirs blue catfish often spend their time pursuing open-water baitfish just like white bass, wipers and walleyes do in those habitats.  Lastly, Flatheads are every bit the big, bad, top-of-the-food-chain, apex predator as a muskellunge and even more.  Sometimes flatheads can be caught on fresh-cut baitfish of some kind, rarely caught on a gob of nightcrawlers, but seldom are they caught on stinky, rotten baits used for channel cats.  Nope, if you want to catch flatheads, you need to be using live bait or imitating live bait (yes, artificial baits can be very effective on flatties); the baits need to be alive, give out the “vibe”, and oh yeah, go big or go home.

Thanks for the blog idea, Tyler! 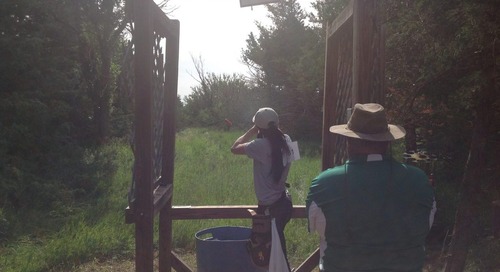 Its likely the sound of firecrackers and pyrotechnics at this time of year that gets me thinking about the ...