Many times I have shared how catch & release can make fishing better, for everyone.  The fact is catch & release is an important part of sportfishing today.  In some cases that catch & release will be required by regulation, in other cases more and more anglers are choosing to voluntarily release fish, big fish especially.

I have noted how big fish can be released and “recycled”, caught again, Fish Recycling.  Here is another example that caught my eye this winter.  I found it here on FaceBook.  Read the first part of the story, look at the smiles on those kid’s faces!  That family has a story they will never forget!

QUINT WE'RE GONNA NEED A BIGGER HOLE!! First I must say Muskies are out of season and must be release immediately if…

Then if you scroll down, you will see there is more to the story. . . . Take a closer look at the picture.  No doubt it is the same fish.  The upper portion of the caudal, tail, fin is very distinctive.

Think about that!  A very respectable 46-inch muskie was caught and RELEASED in 2011.  Five years later the exact same fish is caught by another angler and his young family!  In that amount of time the fish had grown another 3 inches in length and likely a lot more than that in girth and weight.

Wonder who will catch it next and what stories it will continue to produce?!

What an unselfish and profitable act carried out by a couple of anglers?!  WELL DONE! 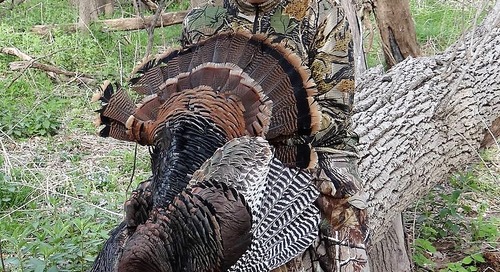 10 Reasons to Hunt Turkeys in Nebraska this Spring!

Nebraska’s spring wild turkey hunting is tough to beat. It really is. Trust me, I know from firsthand exper...