10 Reasons to Hunt Turkeys in Nebraska this Spring!

Trust me, I know from firsthand experience!

And, we Nebraskans as well as our nonresident visitors have plenty of reasons, ten at least, to take to the woods to call in a bearded bird this year.

1. All counties have turkeys. Wild turkeys thrive in all 93 Nebraska counties where there is suitable habitat. Interestingly, some counties in the state even rank within the top 10 counties in the nation for wild turkey abundance.

2. Variety of subspecies. Making Nebraska an even more intriguing destination for spring wild turkey hunting is the fact that you never know what coloration of feathers will be on your bird or what turkey subspecies you might shoot! Relative to biology, Jeff Lusk, Upland Game Program Manager at Game and Parks, says because of the vagaries of genetic inheritance and the subspecies involved in the hybridization, the gradation of coloration of tail feathers can resemble the appearance of Eastern, Rio Grande, and Merriam’s subspecies. Lusk explains the majority of wild turkey re-introductions in Nebraska were of intentionally hybridized turkeys (Merriam’s crossed with game farm Eastern’s). Though, he adds, there were releases of pure Merriam’s, Rio Grande’s and a few Eastern’s. Lusk adds given current knowledge, Nebraska’s turkeys are considered to be hybrids. Game and Parks is presently undertaking a study of the genetics of wild turkeys to determine the makeup of the turkey population across the state.

3. Accessible lands. Nearly 500,000 acres of public and public-access lands are open to hunt wild turkeys in Nebraska. Although there are good opportunities on public areas to harvest gobblers, hunters should not be afraid to knock on doors to gain access to access private land as well. There are lots of turkeys and many landowners that don’t mind turkey hunters.

5. Affordable permits, especially for youth. At $30 for residents and $109 for nonresidents, permits remain affordable. Also, youth age 15 and under can buy a permit for just $8. For most hunters, a current habitat stamp is also required.

6. Easy permits to obtain and carry. Turkey permits may be purchased and printed out on the Game and Parks Commission’s website, across the counter at agency permitting offices, or by mail. Turkey permits also may be bought and displayed via a mobile app.

9. Go northwest, but don’t overlook southwestern and central Nebraska. The northwestern region of the state provides opportunities to hunt the highly-sought after Merriam’s and Merriam’s hybrid subspecies in beautiful, rugged terrain with large tracts of public lands to hunt and state park lodging available. For population densities, the latest survey data indicates that southwestern and central Nebraska have the highest turkey abundance regionally.

10. Nebraska’s turkey hunting outlook is good. Based on currently available rural mail carrier survey data from October 2016, turkey numbers were slightly above the five- and 10-year means on a statewide basis. Spring 2016 harvest was 11 percent higher than in Spring 2015.

So, why not purchase a 2017 spring turkey permit and habitat stamp to get in on the exciting action here in the Cornhusker State!

The post 10 Reasons to Hunt Turkeys in Nebraska this Spring! appeared first on NEBRASKALand Magazine. 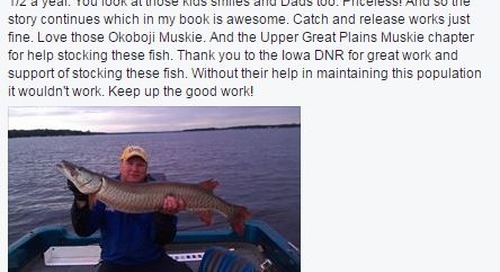 Many times I have shared how catch & release can make fishing better, for everyone.  The fact is catch & re...