A week or two ago, I referred to my son’s adventures this spring being more notable than mine.  I have shared some of them with you.  With all the coronavirus “stuff” we have stayed close to home for weeks, months, but finally ventured out to celebrate my son’s birthday.  As I always tell you, we spend lots of time with family, and while doing that work in some time on the water and in the field.  This trip we did both.

Let me tell some stories, show some pictures. . . .

My son and I usually do not get multiple permits for our spring turkey season.  Sure there are times we could fill several permits, but by limiting ourselves, we usually get to share in each other’s hunt.  Daniel filled a tag early in the season, I hunted a lot, could have whacked several Jakes, but just could not get a mature Tom to come strutting into range.  So, my son scouted out some birds for “the old man”.

Things did not work out the first evening.  The birds showed up where expected, but big Tom was following a hen, and did not work into range until late.  I could have shot, but looking through tall grass and weeds, I was not comfortable and passed.  Earlier, we had them close enough we could hear the Tom “spittin’ and drummin'”, likely in range, but they were behind us on the other side of a cedar tree shelter belt.

We celebrated the birthday and spent time with family.  After lunch and grasshopper pie, we made a quick fishing trip.  The creek was not big.  The fish were not large.  We just wanted to enjoy time together and catch some fish! We caught six different species from that little pool.  Action was hot, sometimes two at a time.

Most were small, but not all! It was a borrowed rod and reel, but I got “in” too! So, my son and I went out for another evening hunt.  The strategerizing is one of the things I love about hunting and fishing.  “Where should we sit?”  “Should we move?”  “Will they go here?”  “What should we try next?”  We debated trying a different strategy, but decided to set up where we did the first evening.  We sat for a few minutes.  I spotted the hen and big Tom east of us, right where I expected them to be.  They were going to make the same circuit they did the night before!

This time, instead of waiting for them to show up late, we wanted to be waiting for him spittin’ and drummin’ on the other side of the shelter belt.  There was nothing but classic Nebraska sandhills over there, well, classic Nebraska sandhills full of water.  With little cover to hide, and nothing but flooded trees, we grabbed a couple of soapweeds and got ready for them to work our way.  A little bit of calling and sooner than I expected, a big red head comes peaking over the hill.  He looks, steps forward a couple, three more steps to strut for that “hen” he heard, stretched up to look, and BANG!

The old Browning scratched another one. We did not know the old foundation was there until we walked up on the downed bird.  It was only a few feet over the top of the hill.  It was small, about the size of our kitchen.  I am guessing it was an old “line shack”, just big enough for one cowboy.  It was built back into a dune, no back wall, just an old tin roof would have sloped up and over.  That cowboy never dreamed there would be turkeys standing there one day.  Bet he never had a small lake just down the hill either. I always experience a flood of emotions after finally punching a turkey tag.  As I sat on the rim of the dune where I killed that bird, I looked west.  The place we hunted was one I had hunted years ago with my Dad and Uncle.  Up that meadow to the west, my Uncle and I laid in the grass one November hoping for some big Canada geese to fly our way. I also remembered a morning years ago, when a small boy and I crawled into a cedar tree windbreak.  We were scouting turkeys for the soon-to-open spring season.  A big Tom strutted right by us, but that boy had fallen asleep between my legs.  He never heard the spittin’ and drummin’.

All these years later we are still hunting turkeys together.  Still sitting in a cedar tree windbreak listening to spittin’ and drummin’, this time on his birthday.  This bird was the latest in the season I have ever killed one.  The next latest I have killed a turkey was just two days earlier.  That was on a hunt just before his birthday, the first turkey we ever jelly-headed together.

We took our time enjoying the evening, savoring the successful hunt and the end to a long, spring turkey season.  Yes, there is some exhilaration and even relief in finally filling a tag, but then also regret that the season is coming to an end.  We do not always get to hunt together anymore.  I think we lingered even a little longer because of that.

Even picked some asparagus on the way back to the vehicle! Was that a great birthday or what? 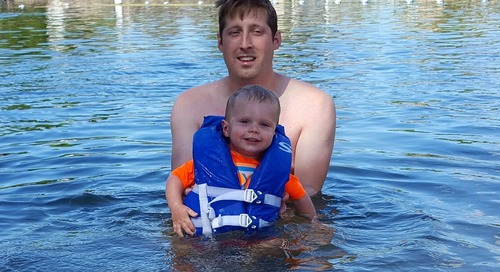 Water Safety Is No Accident At The Beach 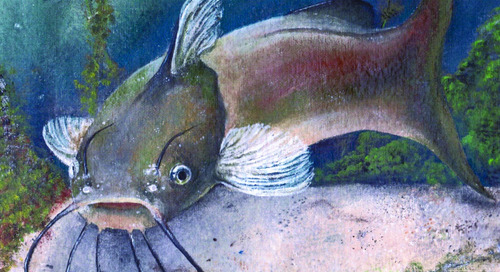 LINCOLN, Neb. – Youth from all across the state were winners in the 2020 Nebraska Fish Art Contest, which b...