Have you ever taken a picture of a bird or other animal, only to have it show up as a mere pinprick on the resulting photo? Why do some photos have large portions that look blurry and only a few bits that are in focus? Simply put, your camera doesn’t see the world the way you do.

The lenses on your camera are constructed very differently than the lenses in your eyes (though the basics of their function are surprisingly similar). More importantly, when you look around, your eyes and brain are constantly working together to interpret what you’re seeing. Your camera isn’t integrated with your brain, which creates a lot of discrepancy between the images captured by your camera and what appears to be the reality in front of you. In that context, your camera is giving you the truth; it’s just not the truth you want to see.

While the disparities between your camera’s view of the world and your own can be frustrating, they also provide great opportunities if you know how to take advantage of them. Once you stop expecting photographs to document a scene exactly as you experience it, you can concentrate on simply making great images. That requires you to understand the primary differences between you and your camera and learn how to compensate for them.

This three-part series will explore how your camera thinks and works and help you become a better photographer, whether you use your phone, a digital SLR camera or an old large-format camera with glass plates. Part one deals with field of view, focus and basic exposure. Part two dives into depth of field and the trade-offs between shutter speed and aperture. Part three is all about light.

The focal length of a lens determines the size of an object and how much of its surroundings you can capture within an image. Shorter focal lengths make things look small and far away but include a broad field of view, which is why lenses with short focal lengths are often called “wide-angle lenses.” If you’ve ever tried to photograph a small room and were frustrated with how little of that room you could capture at once, you needed a shorter focal length on your lens. Wide-angle lenses also are terrific for photographing a dramatic sky over a sweeping landscape.

However, if you want a big bison to fill the frame of an image, a wide-angle lens would be a bad choice. You’d have to get so close to that bison you’d end up as a statistic instead of a renowned photographer. To make your camera make that bison — or bird or moon — look like it’s much closer to you, you need a telephoto lens.

A telephoto lens has a long focal length, which magnifies an image, and greatly reduces the field of view. It also compresses what you see, making images at different distances from you look like they are closer to each other. The binoculars you use for birdwatching have long focal lengths, which is why a bird looks bigger when viewed through them — and why you don’t see much of the bird’s surroundings as you try to figure out if its beak is straight or slightly curved.

On a 35mm camera, or the equivalent, a lens with a focal length of 35mm or less is classified as a wide-angle lens. A lens with a focal length of 85mm is a telephoto lens (though if you want to photograph birds, 300mm is about the shortest you’d want). In between those two focal length ranges is a “normal” lens, a 50mm lens. A normal lens is so named because it provides a field of view and perspective similar to what you see with your eyes. For that reason, they are a favorite of portrait photographers and others who want to depict people or scenes accurately. Interestingly, the nature photographers I know rarely use this focal length.

Focus and Depth of Field

Your eyes focus so quickly and naturally you almost never think about it — until you reach your mid-to-late 40s and can no longer focus on anything less than an arm’s length away. Your brain and eyes collaboratively decide what part of a scene is most important and focus on that. A camera doesn’t know what your brain thinks is the focal point of a scene, so you have to tell it what you want. Making conscious decisions about something you usually do unconsciously takes some practice.

Both your eyes and camera can only focus on a portion of a scene at a time. If one object is close to you and another is far away, you can only focus on one; the other will look fuzzy. As you scan your surroundings, your brain constantly concentrates on what’s most interesting, and you don’t even notice that everything else is out of focus. In a photograph, though, the viewer has time to scan the entire static image, and portions that are out of focus become obvious, especially if they include something of interest. On the flip side, an out-of-focus background can help highlight the subject of a photo, increasing an image’s visual power.

“Depth of field” is the distance between the nearest and farthest objects away from you that appear in focus simultaneously. In other words, there is a limited range of space between you and the horizon that can be in focus when you take a photo. Focal length and the distance between you and the subject you focus on both influence depth of field, but the most important factor is aperture. The aperture of your lens is the hole through which light enters the camera. You can adjust the aperture, which is measured in f-stops. Confusingly, a smaller aperture means a bigger f-stop number, but remember that f-stops are fractions, so an aperture of f/8 is bigger than f/11.

Because not everything in an image will be sharp, you have to decide what the focal point of your photo is and make sure it’s in focus. Often, the focal point of an image is what drew you to take the photo in the first place — your friend’s face, the biggest or closest flower, or a silhouette of a tree against the sunset.

If you’re photographing an animal, the eye is almost always the most important thing to have in focus. When you look at another creature, your eye is automatically drawn to its eye. Looking at a photo of an animal when the eye is out of focus is disconcerting. If the eye is sharp, it doesn’t matter that the nose or ears look a little fuzzy.

If you’re struggling to get multiple parts of an animal, plant or scene to be in focus simultaneously, sometimes the answer can be found by changing your own position. Moving yourself and your camera to a position where two or more important focal points are the same distance from the camera might help you defeat a tricky shallow depth of field situation. It’s usually easier to do some repositioning with landscapes, flowers and other non-mobile subjects.

If you’re photographing a butterfly or deer and really want the entire animal to be in focus, asking it to turn slightly so that it is in a perfectly perpendicular position to your camera is unlikely to work. More likely, you’ll have to move yourself and hope it stays put. Otherwise, just make sure that at least its eye is in focus and take the shot.

Of course, knowing what needs to be in focus and getting the camera to actually do the job are two different things. Most of today’s cameras have an autofocus feature, and camera brains are getting really good at predicting what you’d like the focal point of an image to be. They’re not perfect, however, so it’s important to know how your camera makes decisions and how to override them, when necessary. Sometimes it’s as simple as touching your phone screen on the part of an image you want to be in focus. With other cameras, it can be a little more complicated, but it’s figuring out (and practicing) the procedure so you’ll be prepared when the time comes.  ■

Look for part two of Chris Helzer’s “Your Camera Doesn’t See Like You Do” in the June issue of Nebraskaland. The author will cover depth of field and the trade-offs between shutter speed and aperture. 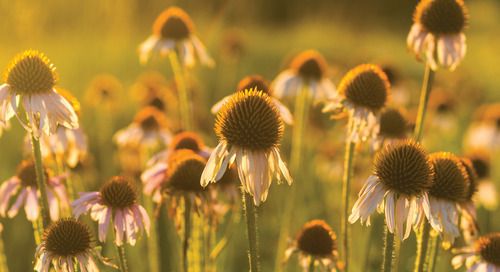 In the pursuit of captivating photography, it sometimes pays to aim low. When developing an interest in nat... 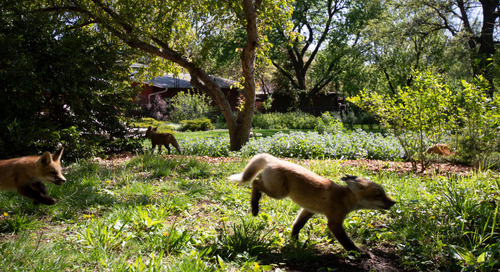 Foxes are continuing to populate our urban areas A big dog rushed into my backyard a few years ago, likely ...