Have you ever wondered why the photos you take at dusk turn out grainy or blurry? Why is it that only the left ear of your deer photo is sharp and the rest of the scene is out of focus? Simply put, your camera doesn’t see the world like you do.

The first installment of this series, released in the May 2021 edition, covered mainly field of view and focus, but also mentioned depth of field. This time, we’ll explore depth of field further, but in the context of exposure and the settings that control it. As a reminder, depth of field is the distance between the nearest and farthest objects away from you that appear in focus simultaneously. In other words, there is a limited range of space between you and the horizon that can be in focus when you take a photo.

Depth of field is influenced by the focal length of a lens and the proximity of your subject. Within those contexts, though, you also can also control depth of field by changing the aperture size (the opening through which light passes into the camera) in a camera’s lens. A smaller hole creates greater depth of field than a bigger one. In addition to altering the depth of field, however, that aperture also influences exposure, or the amount of light per unit area that hits the sensor of your camera (or film if you’re a Luddite or artisan). A big hole lets in more light than a small hole, and more light makes a brighter image.

What if you need a bigger aperture but don’t want the image to be brighter? Fortunately, there is a second regulator of light that allows you to change the aperture without your image becoming too bright or too dark — the shutter speed. The shutter speed of a camera is the amount of time the “door” of the camera stays open and allows light to pass into the camera. A faster shutter speed lets less light in than a slower shutter speed because it opens and closes the shutter more quickly. Fast shutter speeds also help capture sharp images of moving objects like running deer or swaying flowers.

However, while shutter speed and aperture are complementary, the decisions you make about those settings have important ramifications. For example, if you want more depth of field and tell your camera to close down the aperture, you’ll need a slower shutter speed to get enough light to make a nice image. That can create problems if you’re trying to freeze the action of a deer jumping a fence or a flower waving back and forth in a breeze.

A fast shutter speed helps prevent blurry photos as a result of your hands shaking slightly while holding the camera. For most of us, 1/60th of a second is about the slowest shutter speed we can safely use when hand-holding a camera. With telephoto lenses, you want to use a faster shutter speed number than the telephoto number (e.g. use at least 1/300th of a second for a 300mm lens). Vibration reduction technology in newer lenses can buy you a little leeway there, but it’s still safest to follow the shutter speed-lens length rule. These issues are why photographers rely on tripods, which hold the camera steady when you need to use a slow shutter speed in order to get the depth of field you want in an image.

Deciding what combination of shutter speed and aperture to use for a photo can be tricky, and you can’t necessarily trust your camera to choose the best answer. Your camera won’t know that you want both the flower in the foreground and the hills in the background of an image to be sharp. Alternately, your camera can’t anticipate that you want to blur out the distracting background in a close-up photo of a bee on a flower. When you’re trying to make sure the eye of a bobolink is in sharp focus, your camera won’t know that you don’t give a flip about depth of field and just need all the shutter speed you can get.

Setting the Camera on a Priority

One solution is to set your camera on either aperture priority or shutter speed priority, in which you tell the camera which is more important to you and let the camera work within that set of parameters. If you set the camera on aperture priority, you can tell the camera to keep the aperture set at a generous f/16, which will make sure you have adequate depth of field to make both the foreground flowers and the background hills sharp. The camera will then automatically set the shutter speed to whatever is necessary to make an image with reasonable brightness.
On the other hand, you can set your camera to shutter speed priority and tell it to shoot at 1/1000 of a second to make sure no movement blurs that boblink’s eye. The camera will take charge of adjusting aperture as you track that bobolink through alternating patches of shadow and sunlight. Aperture and shutter speed priority can give you less to concentrate on if there’s a lot happening. Just remember that you’re still trusting the camera to make decisions and that it doesn’t share your artistic vision. ■ 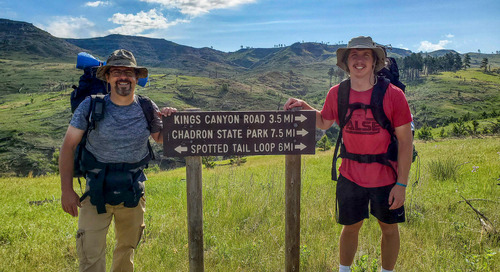 An Adventure Story Through work and play, I have been no stranger to the Pine Ridge Trail. Portions of the ... 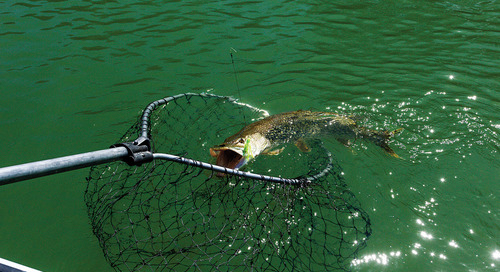 A Toothy, Primeval Fighter For anglers who love a good fight, the northern pike, a needle-toothed, aggressi...