The alarm rang late and the automatic setting on the coffee pot malfunctioned. Once the coffee was finally brewed, a good portion of it spilled across the counter – this time because of user error. With such a rough beginning, my hopes for my morning afield for photography weren’t high.

I still had aspirations to salvage the effort and make the drive to the Oglala National Grassland before sunrise, however. As I rushed out the door, a quick look at the smartphone revealed the day’s top headlines. While walking to the truck in the dark with camera gear in tow, my mind was filled with the nastiness of national politics contained within those headlines. A flurry of other movement, however, soon took my mind elsewhere and put my coffee in jeopardy of being spilled once again.

To my surprise, the mule deer that have become fixtures in our Chadron neighborhood were bedded down near my truck along the street, and apparently were just as startled as I was at our early morning encounter. As they bolted to their feet just a little more than an arm’s length away, my heart began racing. I watched them scurry around the corner with their bodies dimly lit by a distant street light.

Then, in an instant, I heard honking – not from a busy street but from a flock of migrating snow geese overhead, their white bodies almost shimmering from those city lights below. It was as if those honks were communicating a simple message: “Come on, you’re missing the show!” Gladly, I followed their cue.

Soon I was headed west in a familiar race against the sun – a race to make it to a scenic location on one of our great public lands before sunrise. Outlines of a few clouds were visible on the eastern horizon, elevating my excitement at the possibility for an attractive landscape photo. With time running short I set my sights on Toadstool Geologic Park, a special place known to make even mediocre photographers look good.

After covering the 42 miles, I quickly gathered my equipment and hiked to a spot high on a ridge that I suspected to be fairly well aligned with the rising sun. With an elevated pulse rate on the unseasonably warm morning, I inched along that ridge trying to find the best composition. No other care in the world. With no cell service, no offensive messages could reach me no matter how much a politician paid to have them distributed. For the ensuing minutes, after finding a prime spot to best represent the scene, there was little to do but marvel at the magnificence of this region and attempt to capture its beauty.

Before long, the sun caught up to me, emerging from behind clouds to favorably come in line with my lens. Malfunctioning coffee pots and alarm clocks be damned, I’d won the big race against my old adversary and friend, Sol. No victory speech required, just the internal satisfaction of a race well run.

Regardless of this year’s election results, my wish is that there will always be wildlife to greet our day and public places such as Toadstool Park for which we can escape all the nastiness people bring to the scene. And, of course, beautiful sunrises and sunsets. As long as we have that, we always have potential for a big win.

The post Winning the Race appeared first on NEBRASKALand Magazine. 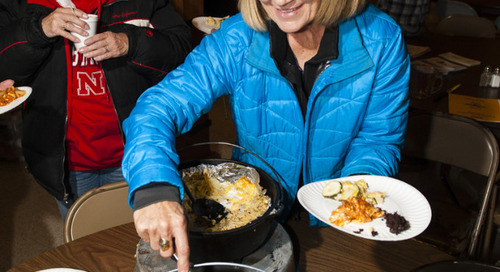 The fall season is here and the holidays are just around corner.  Don’t let the chill in the air keep you f...

Deer hunters encouraged to participate in Hunters Helping the Hungry

LINCOLN – Hunters are invited to donate deer to the Hunters Helping the Hungry (HHH) program this fall so g...