I continue to be called bad names for wearing them. Most recently, I was called a “super wimp” for having them on my hands.

I have been labeled an “inadequate angler” since I have donned on them. I have been told that my “bravado” and “edge” have been lost when it comes to fishing because I am handling fish while wearing rubber gloves.

People have also had their curiosity piqued by those of us who wear rubber gloves when handling fish. Some think we are “noodlers” or hand-fishers. Say what? Nothing could be further from the truth! By the way, hand-fishing or catching fish by hand is an illegal  practice in Nebraska.

It was even conveyed to my fishing partner, Nebraska Conservation Officer Rich Berggren of Waterloo, NE, in a tongue-in-cheek way that “real game wardens don’t wear gloves to handle fish.” REALLY!

I can handle the negative comments that have been directed towards me for wearing those rubber gloves, no problem, but the reason I and others wear them means the betterment of fisheries health. It means fish survival.

Allow me to explain by putting on my ichthyology (fish science) cap loaned to me from our own Game and Parks fisheries expert and guru, Daryl Bauer.

Bauer, a longtime fisheries biologist and the fisheries outreach program manager for the Nebraska Game and Parks Commission, says “Take it from me, a fisheries biologist, if you handle a lot of fish and especially big fish, you use gloves. They’re good for the fish, they improve your grip and they save your hands.”

Bauer explains that fish secrete a mucoprotein protective slime coat that covers the scales and skin. This slime coat, he adds, acts as a defense against invasion by bacterial, parasitic, and fungal pathogens.

Biologically, essential electrolytes necessary for osmoregulation are lost through breaks that may occur in the skin and slime coat, causing dangerous stress. “Open wounds and abrasions,” Bauer says, “caused by improper handling are readily attacked by disease organisms, resulting in further stress and disease. Every fish has a natural mucoprotein or “slime” coating covering its skin and scales. The slime coating is the fish’s first line of defense against infection.”

Fish are very easily stressed by handling and changes in their environment. Ideally we should never even touch the fish when the intention is to release it unharmed. Bare hands, especially dry ones, strip the protective slime coat from a fish. In fact, catch-and-release fisheries surveys show strong evidence of fish swimming around displaying the negative effects of protective slime removal from direct and poor handling with human hands. Without rubber-based gloves, there is also a tendency to squeeze a fish more for a firmer grasp which causes damage to its vital organs.

But, what about using those mechanical fish lip grips to grasp your catch? Are they better than natural rubber or synthetic rubber gloves? Daryl Bauer comments that “actually, depending on how the ‘fish lip grips’ are used, research has shown that they can cause even more damage to fish. I would recommend a good, fish-friendly rubberized or rubber-coated landing net and a good pair of durable rubber or latex-coated, fish-friendly gloves as the best way to handle them.”

So it boils down to this: Any material that comes in contact with the fish should be of a rubberized material (latex, nitrile, etc.) that can be rinsed prior to handling to be minimally abrasive.

Possessing that information, I am surprised that more conservation-minded anglers don’t wear those lightweight, flexible, inexpensive rubber gloves with catch and release fishing, particularly when taking a quick photo of their catch before release.

The interface between fish handling gloves and the fish they handle is directly related to the fish’s survival.

In the case of handling big catfish, rubber gloves specifically designed to make gripping fish easier without removing their slime, should be worn. They need to be wet first before grabbing a fish, in order to be as delicate as possible. These rubber gloves also have the bonus of protecting anglers from catfish spines, sandpaper-like teeth, line and hooks! Some varieties even offer UV and weather protection.

There is no doubt that fish are extremely slippery creatures. All of us who fish know that! But, often getting a handle on one after it is hooked and landed is more challenging than catching it in the first place!

Some anglers even wear latex or rubber gloves during the fish cleaning process to better handle their quarry.

As legal, ethical anglers, one of the skills we all need to master is the ability to handle fish quickly and effectively to ensure their best chances for survival upon release back into the water. Among the necessary tools to use for accomplishment of this process — a pair of rubber fish handling gloves.

ANGLING NOTE: Be sure to share photos of your catches wearing rubber gloves in our Take ‘Em Fishing challenge where you take someone new out fishing and become eligible to win some very nice prizes.  Get more information here. 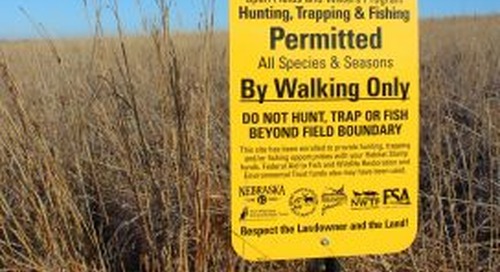 LINCOLN, Neb. – Private landowners have until June 23 to enroll their land in Open Fields and Waters, a vol... 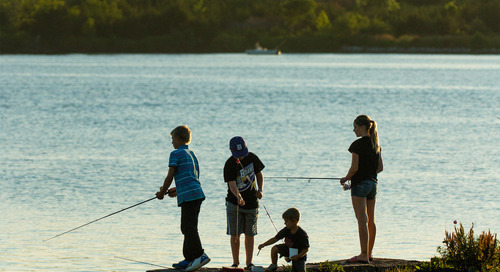 LINCOLN, Neb. — The Nebraska Game and Parks Commission has declared a fish salvage for Wagon Train Lake at ...