Wonderful news was recently released by the U.S. Fish and Wildlife Service showing the number of Whooping Cranes in the Aransas-Wood Buffalo Population (AWBP) is larger than previously believed.   The AWBP includes the birds that migrate each spring and fall through Nebraska between wintering areas on the Gulf Coast of Texas and breeding sites in northeastern Alberta.  The U.S. Fish and Wildlife Service released a report summarizing results from a survey conducted during the winter of 2016-17.   This survey produced a mean (average) estimate of 431 Whooping Cranes.  This is a big jump (31% increase) from the previous year’s mean estimate of 329.  However, the increase is partially due to low-biased survey results from winter 2015-2016 (see the report for more details). The release of the winter survey results comes only about a month after news from the nesting grounds surfaced showing a record-breaking breeding season.  In 2017, 98 Whooping Cranes nests were observed at Wood Buffalo National Park, Canada.  This number surpasses the previous high of 82 nests found in 2014.  During surveys by the Canadian Wildlife Service 1-3 August, 63 fledged young were observed.  This number included four sets of twins and also surpasses the previous record high of 49 fledged young counted in 2006. News about the growing population is exciting, but a new study by yours truly and Mary Bomberger Brown titled “Temporal Migration Shifts in the Aransas-Wood Buffalo Population of Whooping Cranes (Grus americana) Across North America” and published in the journal Waterbirds shows that the species migration is changing.   Specifically, Whooping Cranes are migrating earlier in spring, by as many 22 days, and later in fall, by as many as 21 days, at the end of the study period (2016) compared to the beginning of the study period (1942).  The changes in the timing of migration appear to be associated with warming temperatures during the same 74 year study period.  These results have important implications for Whooping Crane conservation since changes in the distribution of habitats and resources, including wetlands and those associated with agriculture, are evolving.  The paper’s abstract is pasted, below:

Abstract.—Birds are altering the phenology of critical life history events, including migration, in response to the effects of global climate change. Whooping Cranes (Grus americana) are one of the most critically endangered birds in the world. Their remnant population, referred to as the Aransas-Wood Buffalo Population, numbers between 300-400 individuals and migrates between the U.S. Gulf of Mexico coast and north-central Canada twice each year.  Previous analyses suggested Whooping Crane migration was temporally constant in spring and fall. New analyses of observations spanning 1942-2016 show Whooping Crane migration is now occurring earlier in spring by approximately 22 days and later in fall by approximately 21 days. Spring temperatures have also increased in the migration corridor during the same period; however, there is no apparent temperature pattern during the fall. In spring, earlier migrating Whooping Cranes stopped over for longer periods of time compared to late-migrating cranes. This result may be partially explained by single Whooping Cranes migrating with earlier migrating Sandhill Cranes(Antigone canadensis). These results have important conservation implications as the timing of Whooping Crane migration and availability of the habitat and foraging resources, including those associated with agriculture, on which this species relies will be increasingly affected by climate change.

If you are interested in the entire paper, please drop me a note at joel.jorgensen@nebraska.gov

Whooping Cranes have come a long way since numbering less than 20 birds in the early to middle part of the last century, but their numbers and occurrence patterns will likely continue to evolve over time. 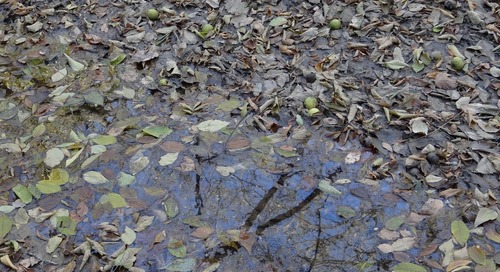 The air is crisp and clean. Nature’s color show is just getting underway. The forest floor is being permeat...