The disease was confirmed after several dozen dead bats were discovered during a recent survey of a mine in Cass County. The U.S. Geological Survey’s National Wildlife Health Center in Madison, Wisconsin, confirmed the disease in three bats from the mine – a little brown bat, a northern long-eared bat and a tri-colored bat.

Nebraska is the 30th state to confirm the presence of white-nose syndrome, which has killed more than 6 million bats since 2006. Additionally, the disease has been confirmed in five Canadian provinces.

“Finding bats with white-nose syndrome in Nebraska emphasizes the need to develop and implement new tools to manage the spread and reduce the severity of the impacts of this devastating disease,” said Jeremy Coleman, national white-nose syndrome coordinator for the U.S. Fish and Wildlife Service.

The Nebraska Game and Parks Commission first began monitoring for Pseudogymnoascus destructans (Pd), the fungus that causes white-nose syndrome, in 2014. Pd was first detected it in the state in 2015 on bats sampled from another mine in Cass County. It was then detected in 2016 on bats sampled from a Sarpy County mine, approximately 1¼ miles from the Cass County mine. Confirmation of white-nose syndrome in Nebraska follows a pattern observed in other states in which white-nose syndrome in bats occurs two to three years following first detection of Pd. The new mine identified as positive for WNS had previously been surveyed for Pd.

White-nose syndrome affects bats during hibernation, causing the animals to awaken more often and use up fat reserves they need to survive through winter. They may also emerge from hibernation too early and starve or freeze to death. Mortality rates for little brown and northern long-eared bats have exceeded 95 percent in some states.

Bats are crucial to a healthy ecosystem. They eat insects that can damage agricultural crops, saving U.S. farmers at least $3 billion annually in pest-control services. Four bat species known to use mines in Nebraska are susceptible to white-nose syndrome: little brown, big brown, tri-colored, and northern long-eared bats. Indiana and northern long-eared bats are protected under the Endangered Species Act.

White-nose syndrome is not known to pose a threat to humans, pets or livestock. It is transmitted primarily from bat to bat, but fungal spores may inadvertently be carried to caves on humans’ clothing and gear. Nebraskans can help bats by following all decontamination requirements if entering caves and continuing to avoid disturbing bats, especially during hibernation. Visit whitenosesyndrome.org/topics/decontamination.

Persons should not touch or handle bats. They should report seeing sick or dead bats to Game and Parks.

For more information about the disease and the response to it, visit: whitenosesyndrome.org, twitter.com/usfws_wns and facebook.com/usfwswns. For additional information, contact Fritz at 402-471-5419 or Catherine Hibbard of the U.S. Fish and Wildlife Service at 413-531-4276. 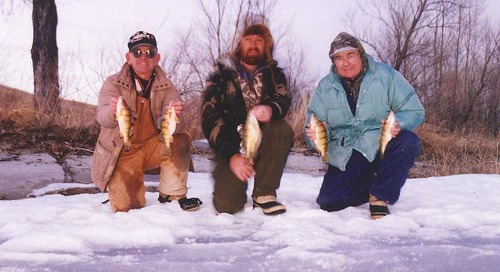 Where Have All My Heroes Gone?

Every now and then life leads me to write something of a personal nature here on my blog.  This is going to...

LINCOLN, Neb. – The entire population of whooping cranes in the Central Flyway is expected to migrate throu...