Home » NEBRASKAland Magazine » What They Said
× Share this Article

There is a video that has been making the rounds on the interwebs; it is about a subject I have already been on my “soap box” about once this winter.  In fact, some of you get tired of my pointy-headed ramblings on the subject; some have even called me some kind of fascist about it.  So, don’t listen to me, take a few minutes and listen to some of the best ice sticks in the world and see what they say.  Yes, the video is kind of long, you should watch it all, but if you can only watch a segment or two, well, you will get the idea.

First of all, there are a lot of different anglers in that video and a lot of different ideas thrown out.  No, I would not agree 100% with everything and I would not expect any of you or any of them to agree 100% with everything I say either.  However, you get the theme:  Especially during the ice season, too many big panfish are whacked from too many public waters, and our fisheries are suffering for it.  I have stated before, will again here, as a fisheries biologist I have seen way more panfish fisheries suffering from the effects of over-harvest than I have seen walleye or bass or catfish fisheries suffering from over-harvest.  Many of our panfish populations do not reach their growth potential and the quality of fishing they could reach because too many big panfish go home in buckets.

You have long heard some self-proclaimed experts state that this or that panfish population was “stunted” and more of those fish needed to be harvested.  BALONEY.  Yes, it is possible for panfish populations to over-populate and stunt, but unless those experts aged the fish they do not know if they were stunted, and I can tell you that rarely is the case.  In fact, if anything, panfish populations become more likely to “stunt” because anglers harvest the largest, fastest-growing panfish and leave the smaller, slower-growing fish.  I am not against harvest, a meal of fresh panfish caught through the ice is one of the best meals anyone ever can enjoy, but I will continue to insist that the small- to medium-size fish are the ones that should be selectively harvested, in moderation, and the big ones should go back!

Secondly, several of the anglers in the video alluded to the need for different regulations for different waterbodies.  I could not agree more.  Especially when it comes to managing for high-quality panfish opportunities, some waterbodies are capable of producing that kind of fishing and some are not.  The wrong regulations on the wrong waters actually could make the panfish fishing worse.  For example, we have some experience with minimum length limits for crappies in Nebraska and simply put, we discovered that they do not work on many waters.  In general, crappies are a short-lived species and for them to reach large size, 12 inches, 14 inches, or even larger, they have to grow fast.  A minimum length limit on a crappie population that does not have fast growth rates will not produce any more large crappies simply because they do not live long enough to get there.  So, we have minimum length limits for crappies on only a few waters statewide, and that list is probably not going to get much longer, ever.

Also mentioned is the need for the “DNR”, the state fish & wildlife agency whatever they are called, to step in and protect panfish populations.  That also is correct, state fish & wildlife agencies are entrusted by the public to be the stewards of those resources.  However, keep in mind that those fisheries belong to all the people, all the anglers, and that state fish & wildlife agencies hear from all of those anglers.  Yes, there are those in the video who believe our panfish fisheries need more protection, and again yes, I agree.  But, I can also tell you as a fisheries biologist I hear from all kinds of anglers and still hear from some who complain that our daily bag limit for panfish in Nebraska is no longer 30!  It is hard to keep everyone happy, and yes, hard for us to satisfy those who think regulations are too complicated as well.

We have ventured into the realm of special regulations for panfish fisheries in Nebraska.  Check the 2019 Fishing Guide if you are wondering what some of those special regulations might be.  Whether we see even more of those regulations in the future will depend on our experience with those we have already enacted, and will depend on the changing attitudes of anglers.  Let me finish with something else I have said before, angler attitudes have changed greatly in the past 30 years, but still need to change for some.

And that is why I will keep bringing this subject up. . . . Our fisheries need it. The post What They Said appeared first on NEBRASKALand Magazine. 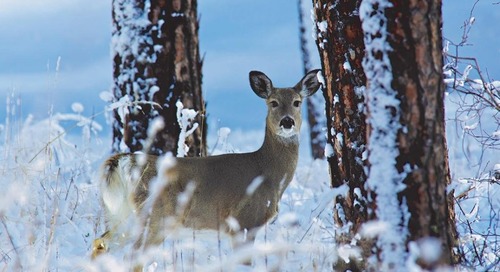 If you’re a deer hunter in Nebraska, chances are you have wrapped up or are getting ready to wrap up your s...