Home » NEBRASKAland Magazine » What Lurks Beneath, June 2018
× Share this Article

It has been awhile since I have teased you with photos of some of the big fish that our field biologists have had their hands on.  Time to change that. . . .

We do a lot of our fish population sampling in the fall, but there is also some that is done in the spring and summer.  Again let me say that when pointy-headed fisheries biologists are sampling fish they are NOT just trying to catch the biggest ones, we want a representative sample of all sizes of fish in a population.  However, in handling a lot of fish, and we do that, we are bound to see a few big fish.  So, let me tease you with some recent examples.

The first comes from deep in the Nebraska sandhills, a 47-inch muskie. Our field biologists have sampled good numbers of muskies every time they collect fish on these sandhill lakes and as you can see there are some quality muskies there too.  The location is deep in the Nebraska sandhills, but it ain’t no secret.  If you need some more hints to figure out where, let me know.

Not all of the big fish are in western Nebraska!  Our biologists in eastern Nebraska have been busy too, and recently they started flashing a few photos around as well.  Look at this pig of a walleye they collected recently! This same eastern Nebraska reservoir is also a very good catfish fishery.  It holds flatheads, blues and channel cats.  Flatheads like this: And oh yes, some big channel cats too! Not sure which one of our field staff was sampling that day; cannot say that I recognize him?

Yes, we enjoy our jobs and the people we work with!

I cannot tell you the exact weight on either of those two biggest catfish.  Once they get to a certain size it becomes difficult to get an accurate weight, and it takes a lot of extra handling to accomplish that.  I will tell you that the flatty was in excess of 50 pounds and the blue likely north of 40!  The “kitty” channel cat, a little smaller, but certainly a double-digit fish.

Let’s see, an eastern Nebraska reservoir with big flatheads, blues, and channel cats, and some big walleyes.  Again, if those are not enough clues for you to figure out where, ask and I will give you some more.

By the way, every fish pictured was released without harm.  Those fish are still swimming, still lurking, waiting for someone to catch, and hopefully release again!

The post What Lurks Beneath, June 2018 appeared first on NEBRASKALand Magazine. 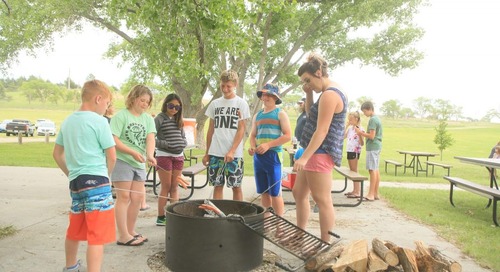