Wetland conditions improve across most of Nebraska

LINCOLN, Neb. – Wetland conditions across most of the state are good and, in places, have improved since early September, according to the Nebraska Game and Parks Commission.

On Oct. 17, Game and Parks released a weekly update on the status of Rainwater Basin wetlands, as well as updated pumping plans.

“Due to cooler temperatures and increased rainfall, conditions throughout most of the state and in many Rainwater Basin wetlands are generally good and have improved over the past two months,” said Ted LaGrange, Game and Parks’ wetland program manager. “The cooler and wetter conditions have also helped to make our pumping more efficient and effective.”

So far this fall, Game and Parks has pumped water into 17 Rainwater Basin wildlife management areas (WMA) and into two wetlands on WMAs located outside of the Rainwater Basin. In addition, the U.S. Fish and Wildlife Service had surface water delivered into Funk Waterfowl Production Area.

In addition to providing places to hunt waterfowl, wetlands are pumped to provide habitat for migrating waterfowl and other water birds, to provide areas for people to observe wildlife, and to spread out the distribution of migrating birds to reduce the possibility of disease outbreaks.

The wetland condition and pumping plans information is updated periodically throughout the duck season. View the report at Outdoornebraska.gov/waterfowlchecklist. Visit OutdoorNebraska.org for more information on waterfowl hunting and to purchase permits and stamps.

The post Wetland conditions improve across most of Nebraska appeared first on NEBRASKALand Magazine. 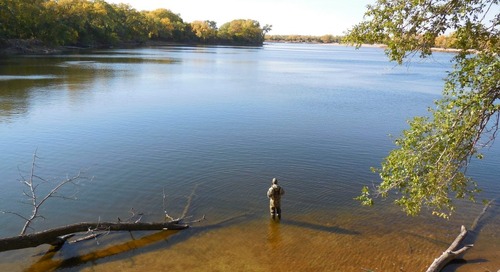 I was wondering what to blog about today, it’s Friday and you know I try to keep things “light” for the wee...