People are encouraged to use caution until further notice while visiting Lewis and Clark State Recreation Area after a waterfowl die-off was reported Nov. 22.

Nebraska Game and Parks staff have collected the waterfowl, which are being tested for cause of death. Due to the size of the lake and the number of snow geese currently utilizing it, additional birds may be affected or found over the holiday weekend.

Lewis and Clark is home to Nebraska’s largest reservoir and is along the state’s northeast border with South Dakota. The lake attracts waterfowl, gulls, bald eagles and other migrating birds, especially during migration periods.

The public should avoid all contact with sick or dead birds and report them to Game and Parks.

Additional information will be released as it becomes available at OutdoorNebraska.org.

The post Use caution at Lewis and Clark SRA after bird die-off appeared first on Nebraskaland Magazine.

Doing some holiday shopping for someone who loves the outdoors? Find what you’re looking for with these sev...

Flying above fog gives you a new perspective of these clouds on the ground. Photos and story by Eric Fowler... 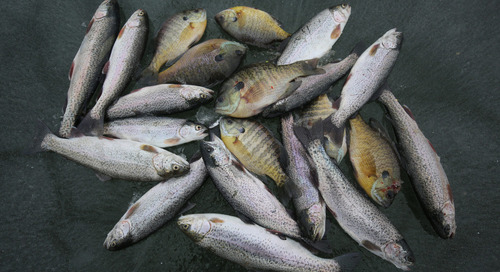 By Jeff Kurrus Fall stockings of put-and-take rainbow trout draw anglers out of the house for a holiday season meal, but where this autumn ritual gets really interesting are those lakes where...