Turkey calling. “It gets too much credit when a hunt goes right and too much blame when it doesn’t.” That according Dick Turpin of Lincoln, NE who is among Nebraska’s most veteran and legendary turkey hunters. Turpin, who is 84 years of age, will hunt turkeys for his 57th consecutive year this spring. He has hunted every spring season since it opened in 1964!

I think he knows a thing or two about these birds.

Turpin, originally from Bassett, NE, retired in 1999 from a long, stellar 40-year career at the Nebraska Game and Parks Commission. He served as a parks groundskeeper, field conservation officer, hunter education coordinator and headed the law enforcement division as its chief.

“I have always been a fan of the box call,” said Turpin. “It’s easy to operate and it can produce every vocalization of a wild turkey. Hand a youngster or a first-time turkey hunter a wooden box call with a little instruction and immediately they begin working the lid against the edges and sounding like a hen turkey.”

Turpin’s passion and respect for North America’s largest upland game bird remains strong and steadfast, especially, he coined “in this Golden Age of Turkey Hunting with all the birds we have here in the Cornhusker State.”

“People need to realize it was the expertise of biologists, the cooperation of landowners and the dollars of hunters that propelled the comeback of the wild turkey,” said Turpin.

“I gave turkey hunting a try decades ago and got hooked. Now I am long in the tooth (rather old), but I still feel like a teenage kid at heart when I take to the woods after a gobbler in the spring,” passed along the turkey call artisan.

I asked Turpin if he thinks there is too much emphasis placed on calling bearded wild turkeys to within shooting range in the spring.

His answer: “Yes, there is. You do not have to be a championship caller to be a successful turkey hunter, not whatsoever. In fact, if you give it some thought, no two turkeys sound the same either. Look at it this way, an aroused gobbler will not care that you haven’t won a calling contest.”

“Patience, knowing your hunting area, good camouflage, realistic decoys and restricting movement are every bit as important as confident calling is,” emphasized Turpin.  “When it comes right down to it, woodscraft means everything.”

The key to effective calling, Turpin stressed, is practicing and getting proficient with a couple different kinds of calls and then being able to mimic the sounds you are hearing turkeys make in the woods while maintaining the proper volume, frequency, cadence and rhythm. “I always say to let the turkeys tell you what to do with your calling. If they are talking, you need to talk how they are talking. If they are quiet, you need to be quiet and call sparingly, if at all.”

How does Turpin begin the day with his calls during the season? “I start calling softly at first light and then crank up the volume later in the morning when I am trying to find gobblers.”

Turpin, the masterful storyteller, spun a yarn about a hunt that happened a while back when he actually forgot to bring his turkey calls with him to the blind. His hunting partner, Dick Herman, told him not to worry that he had a box call. “He pulled that box call out and started screeching nonstop on that thing. I kept wincing and all I could think about were fingernails continually scraping down a chalkboard. Guess what though, a big old tom gobbled, strutted in and started fanning in front of us. So being an expert caller is not as important as some would make it out to be.”

Turpin recommended learning one type of turkey call at a minimum: The yelp. This is the main call of the hen trying to locate or lure other birds. This is the go-to call that hunters utilize to let toms and jakes know where they are. Here is the yelp:

“Purrs and clucks are critical to use, too” suggested Turpin. “They relay a sense of security and contentment.” Purrs and clucks are the softer calls to employ when a gobbler needs some coaxing to come closer. “And, let me tell you, nothing can quite match the feeling of subtly calling a tom turkey in real close,” remarked Turpin.

Regarding safety when calling turkeys, Turpin said besides not wearing the colors of our American flag and the tires on your truck because they are all on a gobbler, sit against a large stump, blow-down, tree trunk or rock that is wider than your shoulders and higher than your head. “This protects your back and shields you from an unseen hunter approaching from the rear.”  Turpin added, “If you do become the hunted by a careless individual coming to your calls, I want you to remember your best defense is to remain seated and motionless and yell as loudly as you can. Shout your name or holler the words stop or don’t shoot!”

“Turkey hunting is statistically very safe, but you should always assume the woods are being combed by the most unsafe person you know,” said Turpin, “and you should be fine.”

LINCOLN, Neb. – Producers can play a key role in conservation by enrolling acres in the Nebraska Platte-Rep... 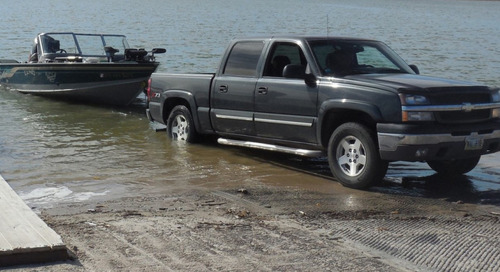 Heard about some boat ramp problems they had over on the Suez Canal this week.  Sounds like they finally go...