There are three main types of turkey calls: box, pan, and diaphragm. Turkey hunters should be proficient with the following three main turkey calls to maximize their chances of success.

Let’s take a look at each type:

Boxes are the easiest to master. Simply run the paddle-like lid across the lip of the box’s rectangular sound chamber.  Traditionally, chalk is applied to the lid’s underside to create the friction that produces turkey sounds, although some newer models use a synthetic waterproof coating instead. Pans are another friction-type call. They consist of a round pan, or pot, which houses a slate, glass or aluminum surface, and a striker made of wood, plastic or carbon. Volume and tone varies based on surface type, with slate being the softest. Cup the pan lightly around its rim with your weak-side thumb and index finger and hold the striker in your strong=side hand like you would a pencil. Turkey sounds are made by scratching the striker across the pan’s surface. Small, half circles make yelps, long, straight lines produce purrs, and short, sharp strokes create clucks. Diaphragm, or mouth, calls consist of varying layers of latex “reeds” stretched across a horseshoe-shaped aluminum frame covered in surgical tape or foam. The more reeds the more difficult the call is to operate. Turkey sounds are made by placing the call against the roof of the mouth and “huffing” air up from the diaphragm to vibrate the latex. The tongue controls cadence. Volume can be loud, but usually not as loud as a box.

While some people find them difficult to master, a mouth cal’s main benefit is its hands-free operation, making it the go-to call for sealing the deal when gobblers get close.

Watch to find out why you should turkey hunt Nebraska this year. 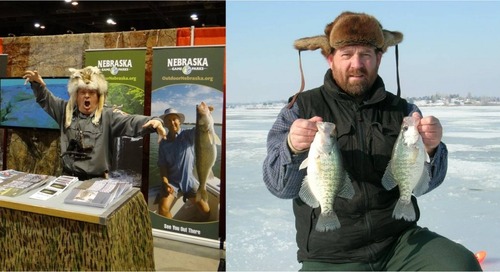 Earlier in the week I noted that I would mostly be talking about Nebraska fish and fishing this week.  A la...