I suppose it started with David Letterman’s nightly top 10 lists, direct from the “home office” in Wahoo, Nebraska, and now media, including social media, is full of lists–top 10 this, top 10 that.

May and June are the best fishing months in Nebraska.  That is true for a variety of species, a variety of waters.  If you are sitting around waiting for a good fishing report right now, let me give you a little clue–GO FISH!  Get off the couch, go now!  The fish are biting.

That is certainly true for walleyes.  Whenever we ask Nebraska anglers which fish they most prefer to catch, for many years now, walleye has topped that list.  More walleyes are caught from Nebraska waters in May and June than any other months.  So, where should you go?  My instant, knee-jerk answer to that question, an easy answer I give all the time, is to start with the annual fishing forecast, go here: That annual fishing forecast is compiled from real data, from sampling done on a variety of waters by Nebraska Game & Parks fisheries biologists.  That data is very representative of the fish populations that can be found in Nebraska waters right now.  However, even though the fish are there, there are no guarantees that they will bite–that is up to the angler.  Be in the right place at the right time, fishing in the right manner, and Voila, success.  But, you have to be sure to at least start in the right place.

Where to go for the best walleye fishing?  You can read some of my thoughts in that 2017 Fishing Forecast, but let me go “inside the numbers” a little more.  Instead of doing the cliched “top 10” list, let me go in a little different direction.  How about the top 5 Nebraska waters for numbers of eating-size walleyes this year, and then the top 5 waters for big walleyes? No doubt the one thing that makes walleyes so popular is that they are excellent on the table.  Actually I would consider the walleye’s cousin, yellow perch, to be just a little bit better, but certainly walleyes and sauger are very good.  Most anglers would consider “perch-sized” walleyes to be the best to eat, 15-18-inchers.  Which Nebraska waters have the highest abundance of those eating-size walleyes this year?

First of all, start by heading west!

I hear a lot of things from Nebraska anglers from one end of the state to the other.  Sometimes I smile when I hear western Nebraska anglers complain that the only waters we at the Game & Parks Commission “care about” are those in eastern Nebraska while at the same time I hear the opposite complaint from eastern Nebraska anglers about the waters out west.  Much of that is a result of “the curse” of Nebraska geography–most of our state’s population is in the eastern third of the state while a lot of our waters, especially the larger waters that are our best walleye habitats, are located in western parts of the state.  Looking at our most recent walleye population sampling, there is no doubt this is the year of the panhandle!

Big walleyes are a different animal.  Above, I referred to eating-size walleyes as over-sized perch.  Big walleyes are more like muskies–they are apex, top-of-the-food-chain predators!  They have a mouth full of sharp teeth for a reason.  Sure, there are big walleyes caught every year on baits and gears being used to catch a bunch of “eaters”, but if you want to consistently catch big walleyes, trophy walleyes, you gotta learn to think of them more as big predator fish and less as glorified perch.

You cannot catch ’em where they ain’t, so again it starts with picking the best waters that will offer opportunities to catch big fish.  Picking those trophy waters is a little more difficult than just looking at sampling data.  In some cases, large bodies of water may not have produced as many big walleyes in the sampling gear used by pointy-headed fish biologists, but even a few big walleyes collected in those large waters may represent a significant population of big fish.  On the other hand, smaller bodies of water are less ideal walleye habitats and may have only a handful of fish in comparison to large bodies of water, but those few fish could be big.

Honorable mentions:  Small waters in eastern Nebraska.  I always make the point that small- to medium-size reservoirs in eastern Nebraska just do not have walleye fisheries like our larger reservoirs “out west” because small waters simply are not as ideal as walleye habitats as large waters.  However, we continue to stock walleyes in a number of small- and medium-size reservoirs across Nebraska so anglers can have an opportunity to catch a walleye from those waters now and then.  Some of those walleyes will be large.  Stagecoach, Czechland, Wagon Train, Wanahoo, and Yankee Hill all will spit out some nice walleyes this year, some already were caught from those waters last winter.

How to Catch ‘Em?

This blog post is already too long, and Lord knows there have been volumes written on catching walleyes.  All I will say now is after spawning, walleyes in Nebraska reservoirs tend to scatter and feed on a variety of prey items.  As spring progresses into summer, those walleyes will “zone in” on gizzard shad or alewives, depending on what is available, but until the abundant young-of-the-year of those baitfish dominate the prey base, the walleyes will eat what they can find.  So, chances are your favorite walleye technique, whatever that may be, will scratch some walleyes in May and June.  Cast, jig, troll, still fish, drift, live bait, crankbaits, spinnerbaits, jigs, swimbaits, slip-bobbers, bottom bouncers, yes, use ’em all.  However, I will say this, as the water gets warmer, a lot warmer, and the calendar moves into summer, walleyes will tend to move towards deeper water and towards the lower end of our reservoirs.  Right now, look for them shallow before you look for them deep.  Whatever prey they may be feeding on is more likely to be found in shallow water right now, although yes, there will be exceptions.

Keep a few eaters for a meal of fresh walleyes, I prefer walleye almondine myself, snap some pictures and release those big fish to be caught again! 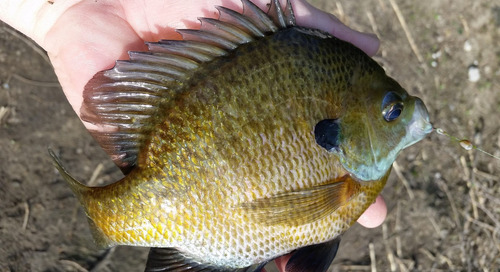 Feeling the need to be outdoors I opted to try my luck on some panfish for a couple evenings this past week... 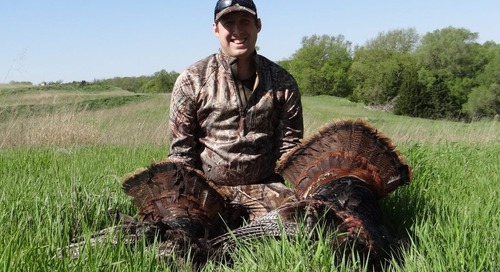 Conditions are ripe for the oldest millennial in our family to continue to hunt. Our son, Zach, is at an ag...